Another day, and another parent who is mad at a teacher. This time, it’s the parents of Highland Park High School in Dallas, Texas, who are outraged about the unapproved and so-called “inappropriate” illustration a teacher used to demonstrate a lesson on how to use commas.

According to CBS DFW, the Highland Park High School teacher presented students with a drawing of JFK, Stalin and two strippers to illustrate the importance of using the Oxford comma. The picture showed that without a comma placed before the word “and,” it would really be referring to JFK and Stalin as strippers — not JFK and Stalin and strippers: 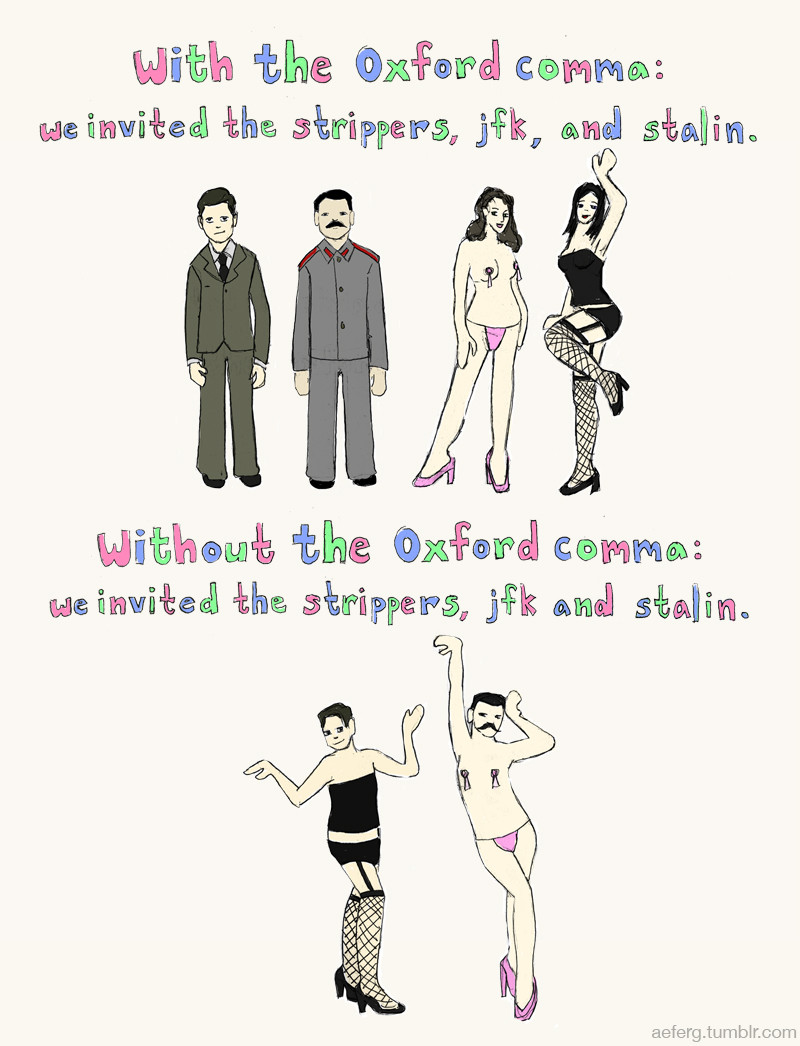 You can probably guess what parents are riled up about, and it’s not historical figures. Highland Park mother Amy Steward told CBS DFW News, “Wow. That’s unbelievable. That is unbelievable. I mean, I feel like I shouldn’t be looking at that picture right now.”

More: 7 Questions you need to ask your child’s teacher before the school year ends

While it’s clear the outraged parents are just trying to look out for their kids, there are a few things the pearl-clutching moms who have raised a stink about this picture have overlooked.

First, this is a drawing. It is not pornography.

Second, the “inappropriate” illustration that depicts two strippers is one that has been circulating the Internet for quite some time. Considering the fact that almost every high schooler has access to the Internet — and 94 percent of high school students access social media on their phones during class — it’s safe to say the teens have probably seen this picture (or one like it) online before.

There’s more. Whether these complaining parents realize it or not, they are perpetuating a confusing double standard that’s become all too common in today’s schools. As parents, we so desperately want teachers involved in our child’s education. We’ll complain if a teacher seems too complacent or like they don’t care (reading lessons straight out of a textbook without putting in any extra work, for example). Most parents are ready to jump at the first sign of a subpar teacher who seems uninterested — by taking it to the PTA or even complaining to the school principal.

More: Your kid’s teacher is a racist. What do you do?

And then we have a story like this, which reminds us there are plenty of teachers out there trying their hardest to keep students engaged. Sure, it would have been possible for this teacher to procure a similar image (or draw another one) that involved innocent, Sesame Street-approved objects like apples and oranges to teach about the Oxford comma.

But would the students have remembered? Would they have even paid attention?

Because of parent complaints, this teacher was forced to apologize to students for using an unapproved image to teach a traditionally boring lesson in an interesting way. So the outraged parents technically won the argument because the teacher was reprimanded. But what these parents probably don’t realize is that their collective complaints may have done more damage in the long run.

Parents want teachers to go above and beyond — as long as it falls into line with teaching methods they approve of. When you think about the fact that there are dozens of high school parents interacting with a single teacher on any given day, this standard is impossible to meet. Parents want teachers to be involved in their child’s education, as long as a teacher is kept on a short leash.

More: Teacher punishes kid because of his religious beliefs

This teacher took a risk by trying to use a relevant, pop culture image to grab kids’ attention and was punished for it. What may seem like one small parent-teacher argument in the grand scheme of things is actually one huge step back for the parent-teacher relationship.

Parents can’t expect teachers to champion their kids and creatively teach controversial lessons like you’d see on the Dead Poets Society — not when parent complaints like this are setting teachers up to fail. Teachers want to do more. They want to make classroom lessons interesting for our kids, but they’re caught between a rock and a hard place, between strict school administration and over-reactive parents.

If this inappropriate Oxford comma lesson has taught us anything, it’s that teachers just can’t win.