Weight is a touchy subject, especially when children are involved. Whether your child is overweight, underweight or you just suspect he or she is suffering from negative self-image, it’s difficult to know how to talk about the weight issue without giving him or her some sort of body complex or making things worse.

In fact, kids are dealing with pressures and insecurities about their bodies even when parents can’t see it. A recent study by Common Sense Media found that more than half of girls and one-third of boys ages 6 to 8 think their ideal weight is thinner than their current size. Even more disturbing is the fact that by age 7, one in four kids has engaged in some sort of dieting behavior.

More: Does your kid have an eating disorder?

Despite our best efforts, kids notice our cultural obsession with weight. If we want to keep them from experimenting with dangerous diets or taking bad advice, it’s imperative that we open the lines of communication and teach them how to cultivate a healthy lifestyle. Most of us are not child health experts and have no idea how to go about this, so SheKnows sat down with a professional to get some advice.

Kristi King is a senior clinical dietitian at Texas Children’s Hospital in Houston, Texas. She counsels children and families every day on the sensitive subjects of diet, health and weight management, and she provided some helpful dos and don’ts to help parents start a productive conversation. Here are some of the useful tips she offers parents on how to broach the weight discussion.

More: Why I won’t teach my kids the word “fat” 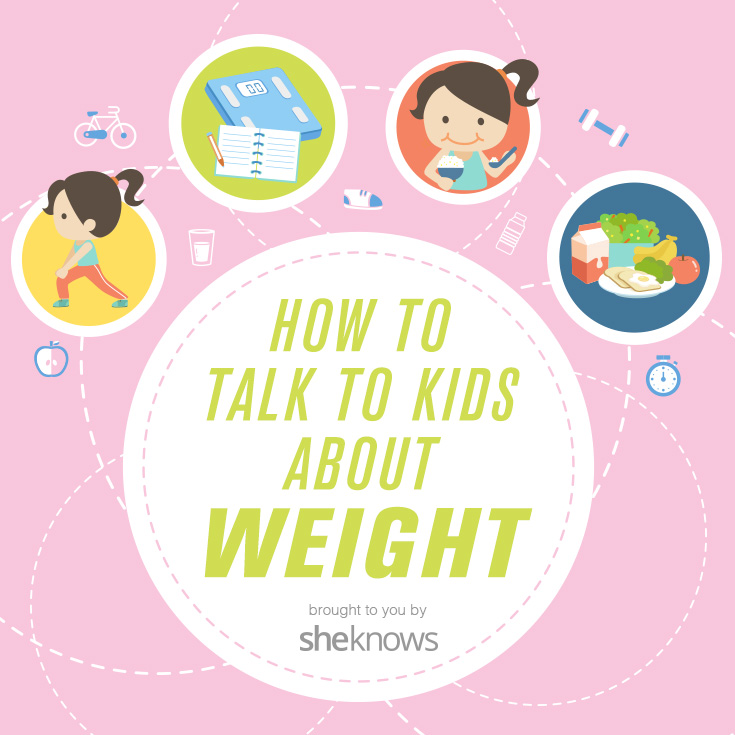 Do: Focus on your child’s health instead of his weight

Rather than sitting down with your child to have a conversation about the size of his body, aim for a discussion of his lifestyle, activity levels and eating habits. Take care to dispel the notion that body size is the most important thing because that can be counterproductive. “We want to take the focus off weight and appearance and make the focus about health,” says King. “Because ultimately that’s what we’re aiming for.”

Children are complex people with their own thoughts and emotions, and it’s important to treat them that way. King says the best way to do this is to ask open-ended questions and be ready to listen — actively listen — to what your child is thinking and feeling about her body. Then use her thoughts and feelings to guide the conversation.

This goes for your child and for you. “Children learn from role modeling,” says King. “So if mom is saying, ‘Oh, I hate the way my thighs look,’ young girls and boys will pick up on that.” Keep your child focused on setting positive goals instead of focusing on what she doesn’t like about herself and reassure her that she has great qualities that have nothing to do with weight. Says King: “It sounds kind of simple and intuitive, but really reassure them that they’re loved and point out those good qualities on a regular basis.”

Do: Lead by example

Use role modeling to your advantage. Commit to giving your child concrete examples of moderation, healthy eating and an active lifestyle that he can look to as inspiration. Instead of listing off things he should avoid, King says, “Focus on the ‘do.'” Give kids ideas and suggestions, like inviting them on a walk instead of harping on them about sitting on the couch.

Don’t: Expect them to do it on their own

Living a healthy lifestyle is easier when you have someone to hold you accountable. Instead of setting goals only for your child, vow to make it a family affair. “If you use the word ‘we,’ it tends to work a lot better than making it a ‘you’ thing,” says King. “It’s just like adults. I do better if I have someone to go to the gym with who holds me accountable. This way there’s accountability from parent to child and child to parent to commit to healthy goals.”

Do: Give kids the tools to get and stay healthy

If your children are concerned about their diet, make plans to get them into the kitchen and grocery store so they can learn what healthy eating looks like. King says kids often head off to college having never grocery shopped or helped prepare a family meal. That sets them up to struggle as they attempt to manage their health as an adult. Getting kids involved in food prep helps them appreciate where food comes from, teaches portion control and gives them a sense of ownership over what they’re eating so they’ll be more likely to make positive choices.