Summer’s here, and hot car warnings for parents are everywhere. In the few months of summer so far, we’ve already lost 10 children to hot car death, and Evenflo’s new smart car seat may finally have the answer.

Hot car death is scary because it hinges on a parent’s forgetfulness. And every single parent, especially exhausted parents of young babies likely to quietly nap in a car seat, have experienced that panic of almost forgetting a child before. But this forgetfulness can be deadly — based on NHTSA data spanning from 1998 to 2014, 53 percent of hot car deaths occurred when a child was forgotten by a caregiver. That’s 336 kids who have died (and possibly many more) because they were forgotten in the backseat of a hot car.

More: I left my toddler in a hot car

Parents living in constant fear of accidentally leaving their child in the car have long been looking for answers. Whenever this topic comes up in parenting forums and on Facebook threads, most parents wonder: Why hasn’t someone invented something to solve this problem yet?

A car seat manufacturer has finally stepped up with a response that could put an end to this tragedy. The Evenflo Advanced Embrace DLX Infant Car Seat with SensorSafe technology, now available at Walmart for $150 and on the official Evenflo site, is designed to sound an alarm when a driver turns off the ignition. This little jingle can tell a parent that their child is still in the backseat. With a design so simple and so logical, it’s a wonder it hasn’t been invented yet. 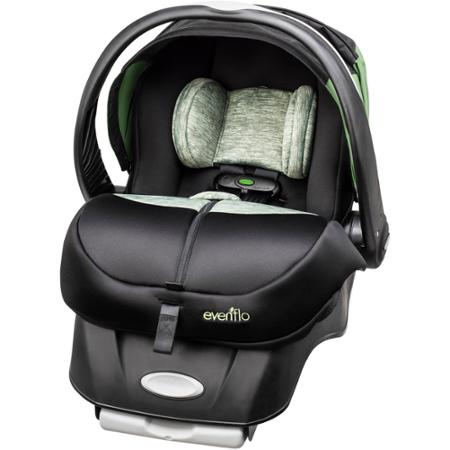 Here’s how it works: The Evenflo “smart” infant car seat contains a sensor on the chest clip harness that transmits a Wi-Fi signal to a wireless receiver plugged into the car’s data port once an ignition has been turned off. If a parent doesn’t open up the chest clip to get a child out of the car, a safety alert will sound. This smart chest clip is also helpful to keep a parent aware on the road — the chest clip will sound if it’s unbuckled while a car is moving (i.e., if an unruly toddler figures out how to unbuckle on a car trip).

This ingenious car seat has an extended weight range for long-term use, from four to 35 pounds. Meaning, if you can afford it, you’ve just bought yourself peace of mind for a good few years to minimize this hot car risk.

While there’s no denying that there is a major need for this smart car seat among parents looking for answers, not every parent can afford to plunk down $150 on a single piece of baby gear. For those parents who can’t invest in a smart car seat with an alarm, there are plenty of other precautions that can be taken to make sure you don’t forget your child in the backseat.

More: You would never forget your child in your car — would you?

As always, there’s an app for that. The Kars4Kids safety app is Bluetooth-enabled and sounds an alarm whenever you leave the car with your phone in your hand or your purse. You can also use a few handy tricks to help remember your baby in the backseat the old-fashioned way: By leaving yourself a note on the dashboard, by leaving an important object like your left shoe in the backseat or by setting a daily alarm on your phone.

Evenflo’s initiative reminds us that hot car death still needs to be taken seriously. We hear stories on the news, and we think it could never happen to us. But therein lies the biggest mistake — every parent forgets, whether it’s misplacing your keys or missing a playdate. A simple reminder from a smart car seat will guarantee you never forget your baby in the backseat.

51 mins ago
by Kristi Pahr

5 hrs ago
by SheKnows Editorial