Picture it: You finally get a night out as a new mom, and your baby starts crying at the top of her lungs.

Don’t think anything could be worse than sitting there, red-faced and desperate for your little one to just calm down? Just wait. A diner owner from Portland, Maine, has found herself in the middle of a viral brouhaha over her reaction to a wailing tot in her restaurant.

Darla Neugebauer apparently slammed her hands down on the counter at Marcy’s Diner and yelled at the 20-month-old girl to be quiet. Neugebauer says it worked, and she posted about the encounter on her diner’s Facebook page, calling the child a “beast” and a “demon.” 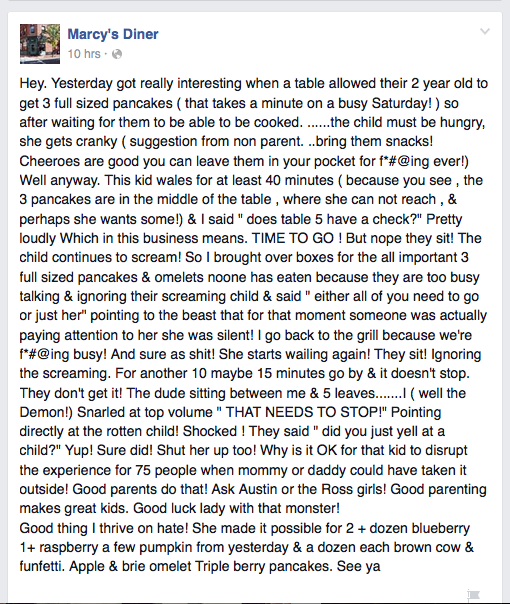 In another post, the diner owner also threatened violence, noting “being physical is not something I cower from.” Talk about the makings of a viral firestorm!

More: If your kid has never had a tantrum, I applaud you (WATCH)

The fact is, it’s hard being the mother of that screaming child. Kids don’t come with mute buttons that we can tap to make them calm down in public. Nor do most parents have a crystal ball indicating when a child is going to have a meltdown. It can happen anywhere, anytime, especially at 20 months old.

Certainly calling someone else’s child a “beast” or a “demon” is below the belt. Kids are humans too! And no one should ever threaten a child — or anyone, really — with violence. It’s no wonder Neugebauer is getting mixed reviews on her actions on her business’s Facebook page — including some from very angry parents — despite pulling the already-viral rants from the page.

The diner owner may have gone over the line. That said, one thing all moms learn along the way is that our kids can be pains in the tush, and while our love for them enables us to look past some of their more, ahem, annoying moments, not everyone feels about our kids the way we do. The guy just trying to drink his morning coffee in peace one booth over in the diner doesn’t have the warm and fuzzies that help us as parents love our kids even when they’re lying on a floor, pounding their little fists into the tile because we gave them a blue sippy cup instead of a red one.

More: 7 Thoughts every parent has during a toddler tantrum

It behooves every mom to not only keep that in mind but to be on the offensive. Whether it’s handing out baggies of goodies to airplane passengers when you’ve got a baby on board or simply offering up an “I’m sorry” to folks around you as your kid screams in the grocery store line, acknowledging that your child is not the center of the universe can go a long, long way in getting other people to soften up and recognize that, well, your kid is just being a kid.