“Digital kidnapping” is a phrase no parent wants to hear in the social media age, especially concerning a child as young as 4. One Dallas mother woke up to a living nightmare when she was sent screenshots of her daughter on Facebook — posted to a strange man’s profile.

After witnessing an incredible identity theft, 23-year-old Danica Patterson now considers her 4-year-old daughter Bryleigh a victim of digital kidnapping. The strange man in question, who stole Bryleigh’s images to post to his Facebook page, lives in New York. According to his profile, Ramon Figueroa claimed Patterson’s 4-year-old was his own daughter by posting her stolen images with frightening detail that is enough to make the hair on your neck stand on end.

More: Is a twerking teddy bear appropriate for your kid?

Under the photos of Bryleigh, Figueroa wrote, “Ma daughter gunna break y’all sons hearts (sic),” and “Girl version of me,” and “This is how she looks in the morning… she said daddy stop [taking pictures].” 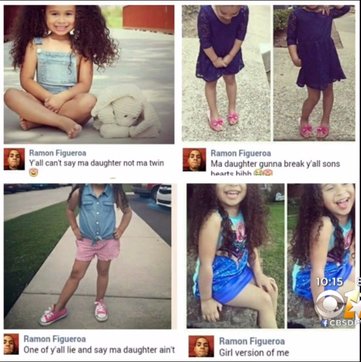 Patterson told CBS DFW, “It was my daughter! All over his page. It’s scary. That’s the only thing I can really say, it’s scary.”

Patterson was first tipped off to this disturbing digital kidnapping when she was sent screenshots of Figueroa’s profile by a friend. Consulting attorney John Browning, who specializes in social media, agrees that this image theft falls under the umbrella of digital kidnapping, though it is a legal “gray area” with few repercussions. Browning explained to CBS DFW that while it is illegal to impersonate another person under Texas law, there’s no law against pretending someone is related to you.

Patterson’s only legal option was to complain to Facebook, which she did immediately. Patterson also tried to reason with her daughter’s digital kidnapper by sending him a message and asking him to take the pictures down. Patterson was quickly blocked by Figueroa, making it impossible to report each individual image. Facebook responded to Patterson’s pleas with a brushoff, saying that Figueroa’s profile met “community standards.”

Patterson said, “Facebook sees no problem with this man pretending this little girl is his.” To their credit, Facebook updated their position in a statement to News 8, “This type of content violates our standards. Once a parent or guardian reports it to us, we work quickly to remove it.”

As of now, Bryleigh’s pictures have been taken down from Figueroa’s page, though his profile remains active. Still, this digital kidnapping case is far from closed because it’s the kind of thing that could happen to any parent on the internet.

I’ll admit, I’ve scoffed at parents who take internet privacy a little too seriously — furiously monitoring when and where pictures are posted of their children online. Until hearing this story, I found protective online parenting to be paranoid, but the reality is that taking a few basic precautions could keep your child’s images from being added to another person’s page.

Patterson is an average mom and Facebook user who made a digital mistake that compromised the safety of her daughter. “I thought my profile was set to ‘private,’ but I didn’t know posts can be public,” said Patterson. Whether you’ve shared one or one dozen pictures of your kids on Facebook, consider Patterson’s story a cautionary tale — double check that your profile privacy is set only to friends, under “Who can see my stuff?” on the Facebook drop-down menu.

This seems like common sense, but it’s a mistake many of us are making. Stricter Facebook settings mean you don’t have to worry about who is viewing — or stealing — those adorable pictures of your kid.