Blake Lively posted an adorable photo of her husband, Ryan Reynolds, holding their daughter James in a baby carrier. The only problem is that he didn’t have her strapped in quite right — and the internet was quick to let him know.

Blake Lively and Ryan Reynolds don’t share many photos of their daughter James, and this is probably why. The actress posted this photo of Reynolds holding their daughter, James, in a baby carrier on her Instagram page — and fans were quick to point out he was doing it all wrong.

“That baby is not positioned right. Cute picture but check babywearing pages to see proper positioning for the baby’s safety,” one person pointed out.

“They need a course on baby wearing,” chimed in another.

This fan put it a bit more bluntly. “And this is why she doesn’t post pics. People can’t shut the fu** up.”

Reynolds was on the Today show and he addressed the baby carrier backlash in the best possible way.

“The baby is not properly secured in the vessel that I’m wearing there,” he admitted. “And, you know, I’m a first time dad. And that is not the first mistake I’ve made and I can guarantee it won’t be the last.”

He went on to say that it was his first time to use that particular baby carrier. “I had never used that particular carrier before so every other time it’s been perfect.”

In case you were wondering, Reynolds is using the Lillebaby baby carrier (retails around $125) and the photos on their website show that a waist strap goes around the adult’s waist so the baby’s bottom is more secure so they don’t slip out. 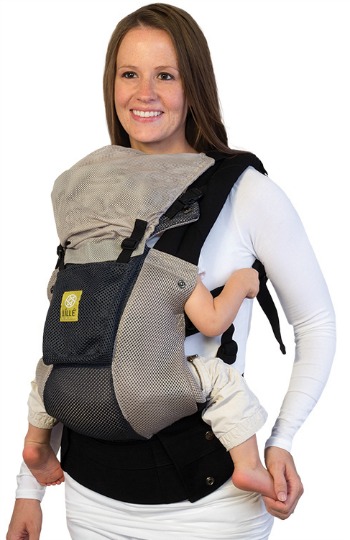 Baby carrier drama aside, Reynolds said he was enjoying his time with his 6-month-old daughter. “We’re getting a lot of sounds, nothing that sounds like discernible English at this point. I’m mocking her a lot,” he joked.