A mom was unpleasantly surprised to find that a photo of herself and her child was posted by a manager of a retail business — accompanied by some of the most vile judgment you’ll find online.

Erica Kalnins, who had popped her 5-year-old daughter into a Tula carrier on her back during a shopping trip, was minding her own business as she went about her day. However, the manager of the Icing store where she was shopping thought she was pretty damn lazy and ridiculous, and chose to take her photo, post it on her Facebook page and berate the mom who was doing nothing more than taking care of her kids. 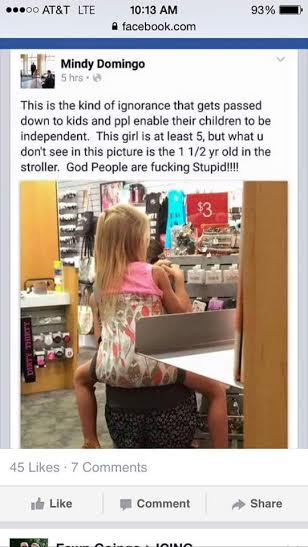 “I found out about the photo because it had been shared in a bunch of baby wearing groups,” the Florida mom tells me, and she quickly became incensed once she read the comments of the original post as well as the comments that flowed in on the manager’s Facebook page once she posted the photo. “Some of the things that this stranger was saying were derogatory and downright wrong,” she says. “She was not familiar with baby wearing and made claims that people who used those were lazy parents.”

More: Woman gets lost, gives birth and starts a forest fire to get rescued

Once the photo started making the rounds in baby wearing Facebook groups, the Icing Facebook page quickly became the target of ire from moms everywhere. “This is disgusting,” writes one commenter. “Icing should be ashamed that this is the kind of management they have.”

Another mom writes, “Just because it’s not your parenting view, does not ever (I repeat EVER) give you the right to shame someone else’s parenting methods. Shame on you for being such an uneducated person in the world of baby wearing. You have pissed off a worldwide, very tight knit community.”

My friend Katie agreed, saying, “People are so ignorant and rude, snapping pictures of someone. That’s why these carriers come in toddler and even preschool sizes.”

And my friend Niki wondered why this was even an issue, saying, “How is it different than giving your kiddo a piggyback ride? And honestly, what is it to anyone how you carry your child? Just plain silly.”

The notion that this angered a worldwide community was absolutely true. “Within an hour or two, this story started spreading like wildfire,” shares Kalnins. “I was getting strangers emailing me from all over the U.S. Then, within four hours — the world. I had moms emailing me with support from Australia, South Korea, South Africa, the Netherlands, Canada, Hawaii and Japan.”

More: Why you need to be careful taking babies to MLB ballparks

Soon a mom local to Kalnins organized a sit-in (or a wear-in) in response to this incident. “We met up and walked through the mall (peacefully),” she tells me. “We were just educating people on baby wearing in general (it’s not weird, it’s amazing for your children, and we do it proudly).” She mentions that they did not storm the store, but they did take a photo outside the store. She reports that security was amped up, and many corporate Icing employees were milling around, looking flustered, but overall their reception was extremely positive. 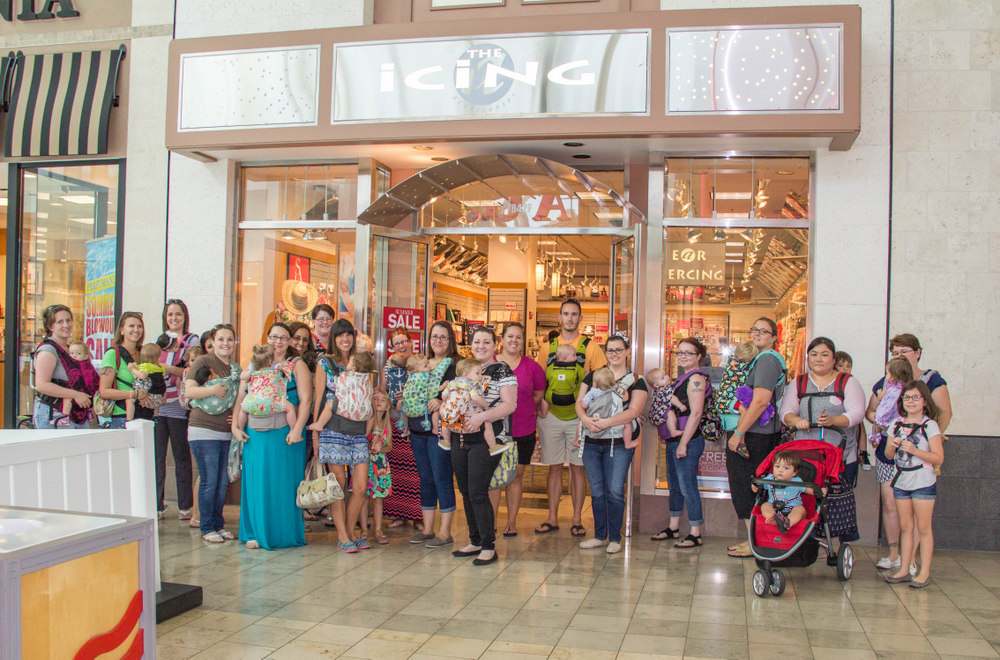 Icing has also posted a statement to its Facebook page.

I’m thrilled that she got as much support as she has, and I also hope that Icing, as well as any store anywhere in the world, will use this as a valuable teaching moment. The actions of an employee can and do tear down the reputation of a business, especially in the modern age of social media. We moms stick up for one another, and if you wrong one of us, you wrong us all.

18 hrs ago
by Anna Davies