Actress Keira Knightley welcomes her first child with her husband, musician James Righton. Get all the details on their bouncing bundle of joy as they embrace being parents for the first time.

Multiple sources are reporting that Knightley, 30, recently gave birth and welcomed her first child with her musician husband. After making the awards show rounds wearing stylish maternity clothes to promote her movie The Imitation Game, the actress has been keeping a low profile as she awaited the arrival of her first child.

Knightley and Righton, who were married in 2013, have yet to release the gender of the baby name of their baby, however the actress did open up about labor and delivery during an interview with Ellen DeGeneres.

Knightley’s maternity style throughout her pregnancy was feminine and flowing, as the actress opted to steer clear of bump-hugging dresses that many actresses favor. 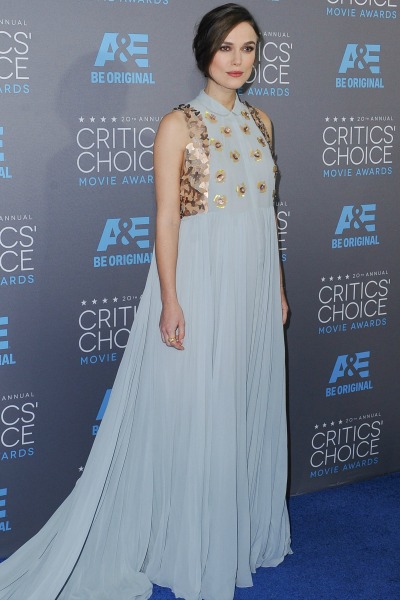 When she was asked if it was a challenge to find clothes to fit her pregnancy curves, Knightley said that her waist “has disappeared.”

“Does it make it harder? It just means that you’re not going to wear anything tight, for me. Actually people do wear tight things don’t they, when they’re pregnant. I don’t want to go for that,” she said. “So it’s just all quite loose, which is quite nice. I’m quite comfortable.”

Even though she loved her chic and comfortable maternity clothes, Knightely did admit there was one thing she was looking forward to once she was no longer pregnant.

“When can I drink? Please?” she joked to DeGeneres. “I just want a margarita!”

Stay tuned for Knightley’s baby name choice! I predict the baby name will be like her personal style — vintage with a little modern edge.

Quintessential Baby Names Beginning With ‘Q’ for Your New Cutie

5 hrs ago
by Amelia Edelman

Did This Mom Shame Another for Breastfeeding Her 6-Year-Old Son in Public?