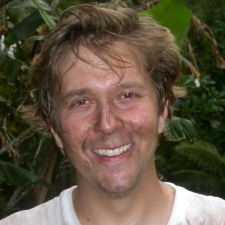 A few years ago my wife and I were given a baby long-tailed macaque while living on a remote Pacific island. Reintroduction proved to be impossible, so we named him Gomez and incorporated him into our daily life. He slept with us in bed, grabbed whatever was in reach and generally created mayhem in our life… all great training for when we’d go on to raise our two boys. Here’s what I learned.

Movie theaters, restaurants, long car trips and a good night’s sleep are all out. But that’s (pretty much) OK because what you want changes as well.

On the little island where we were living and building a house with friends, there were no baby monkey-sized diapers available to buy. So we cut a cotton T-shirt into little pieces and secured the homemade diapers with a safety pin. We washed them, until we did the math: A large Hanes T-shirt can be made into almost 40 diapers at a cost of just 3.5 cents apiece!

Baby monkeys, like baby humans, seem to prefer cozy, super-tight spaces that feel safe. For Gomez that meant being tucked into a shirt and put in a backpack. For our boys, it was a swaddle blanket and an Ergo carrier.

As a man, I was far from biologically prepared to wake up with a set of sharp teeth on my nipple. When we transitioned him to his own crib… in our case an open box… beside the bed, everyone was better for it.

Unlike baby humans, our baby monkey arrived with no notice. We were thus scrambling to tie up blind cords and duct tape electric outlets at the same time as Googling “baby monkey and infant formula.” Better to do the baby proofing far in advance.

A sink works just fine. Even for monkeys, which unlike humans have the complication of a long tail; Gomez’s just corkscrewed down the drain.

7. Use flash cards… in moderation

Our monkey liked looking at cards, but in the end they were better for our own psyches than our monkey’s; he’d just end up throwing, bending and chewing them before grabbing a few and running up a tree.

Climbing seems to be an activity that comes a lot more naturally to primates, human and macaque, than soccer or piano. But unlike baby humans, long-tailed macaques can climb from birth. (Few human parents, however, have ever found their infant stuck behind the refrigerator following a hearty mid-morning climb up the freon coils.) So when it came time to raise our own children, we gave ’em lots of opportunities to climb, from trees to rock gyms, starting at a really early age.

9. Expect your friends to be just OK with the change

Unlike most expecting parents, we were living with half a dozen friends when our baby monkey arrived. They accepted our new life circumstances but didn’t share our sense of wonder that, say, monkeys really do love bananas or that they’ll happily perch on the top of your head for hours at a time.

The illegal pet trade is a bad thing. Many monkeys die in transit for every one that becomes a pet. (We ended up with Gomez only after his mother, a wild monkey, was killed as a “pest.”) And having raised both humans and a monkey, I can say that baby monkeys, while cute, really aren’t awesome pets. Both are fun… hard fun… but baby monkeys never learn to brush their own teeth or pick up after themselves, and they rarely take care of you in old age.

Alex Sheshunoff’s vaguely humorous memoir, A Beginner’s Guide to Paradise: 9 Steps to Giving It All So You Too Can… Move to a South Pacific Island; Wear a Loincloth; Read a Hundred Books; Diaper a Baby Monkey; Build a Bungalow, and Maybe, Just Maybe, Fall in Love!* Individual Results May Vary, is now available from Penguin Random House.

4 hrs ago
by Racheal Pulver

Kristin Cavallari is ‘Thankful’ Her Parents Divorced, Says It’s Helping Her Own Kids