Happy Wednesday Hump Day — also known to us as Celebrity Baby Bump Day. We rounded up the cutest pregnant celebrities of the week including Kristin Cavallari, who just announced she is pregnant with her third child. Pregnant Zooey Deschanel looked amazing on the cover of Cosmopolitan magazine, while Jessa Duggar shows off her growing baby bump. Brooklyn Decker and Jaime King round out our list of the most buzz-worthy celebrity baby bumps of the week. 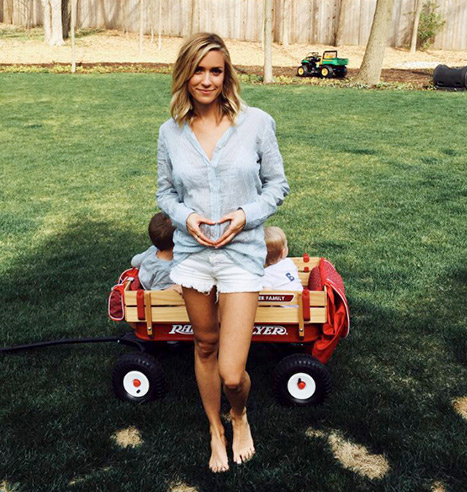 “We’re at it again! Thrilled to announce baby number 3 is on the way! The Cutler crew just keeps on growin’!” she captioned the photo above, which shows her making a heart over her belly while her two boys, Camden, 2, and Jaxon, 12 months, sit in the wagon behind her.

The 28-year-old jewelry and shoe designer has said all along she wanted three kids, but recently admitted that she and her husband, NFL quarterback Jay Cutler, had their “hands full” with their two young boys. Perhaps this baby was a surprise — or maybe they were planning this all along.

No word yet how far along Cavallari is, however, she must be early in her pregnancy as she just posted this photo of her and Cutler at a charity event and we see no hint of her baby bump in this gorgeous red dress.

Next up: Pregnant Zooey Deschanel is Cosmopolitan‘s cover girl