As you take a moment to ooh and aah over these irresistible pregnancy announcements, think about what’s really going on here. To many people, same-sex unions are still controversial. But the fact is that these unborn babies have two parents who love them very, very much — enough to go to extra lengths to bring them into the world.

As unconventional as these pregnancy announcements may be, these new babies are lucky and these new parents deserve to be celebrated.

There’s nothing not to love about this simple, yet sweet July 2014 pregnancy announcement by Two Mummas, an Australian couple together for seven years and engaged since 2010. The ladies track their transition into motherhood on their blog and are most recently contemplating baby No. 2. (Good luck!)

Image: best stuff on the internet

Here is what every new baby needs for a happy childhood — one or more dads with a sense of humor. While this photo shoot was initially created by a “nerdy husband” who took pregnancy pictures into his own hands, Heather Marzi of Pinterest points out that these hilarious shots would be perfect for a gay couple adopting or using a surrogate. 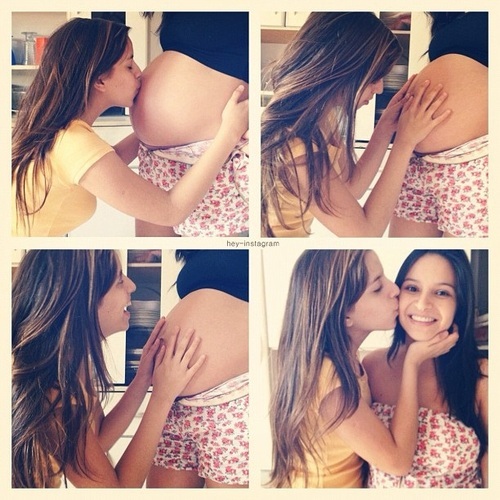 What better way to announce your impending pregnancy than with a candid photo quartet on Instagram? The most endearing part of these pics is how absolutely elated both women look. 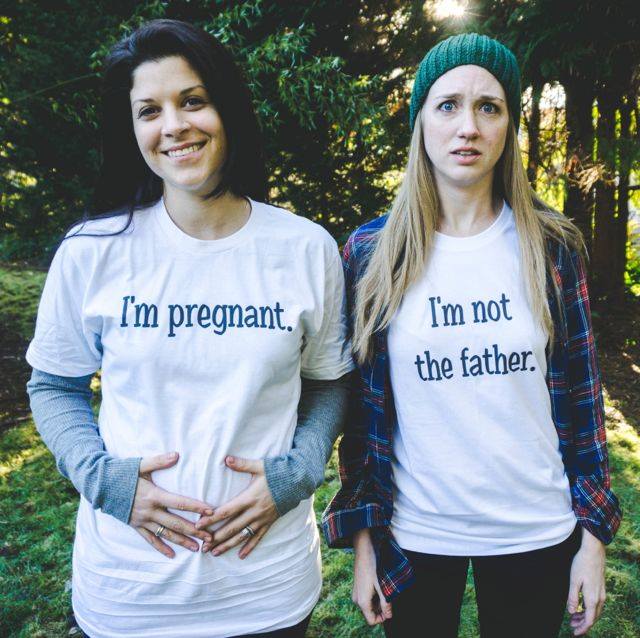 Witty lesbian couple posts a tongue-in-cheek custom pregnancy announcement to Reddit in January 2015 and the internet goes wild. Meg Owen and wife Becca, who conceived through artificial insemination, said they were looking for a “fun way” to tell loved ones they were starting a family. Nailed it.

6. It was on purpose 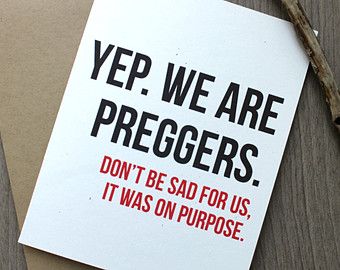 Repinned as a same-sex pregnancy announcement, this card says what everyone is thinking: There’s no way this was an accident. We really, really wanted it this way. Etsy ($30)

Pinterest user Taryn Teigue posted her take on a traditional baby shoe pregnancy announcement with a twist: She and her partner Melissa were expecting in February 2014. Congratulations, ladies.

8. She’s having our baby

Shannon Day and her partner’s pregnancy announcement, which Day uploaded to Pinterest, is almost too cute for words. One whimsical chalkboard sign explains what’s really going on here: “She’s having our baby,” and Day couldn’t be happier.

9. The tale of two surrogates

Perhaps I saved the best for last because there is so much about this surrogacy shot for two dads that warms my heart. Photographer Mimi Nguyen explains that she met expectant dads Rob and Tzach through a mutual friend, Chantelle, who was serving as the couple’s surrogate. Rob and Tzach’s story is even more unconventional in that they chose to have two surrogates carry each dad’s baby from the same egg donor. The doting dads were blessed with a big surprise: A little boy and a little girl on the way, Ethan and Ella.