Prince George looked absolutely adorable as he arrived with his dad Prince William at the Lindo Wing of St. Mary’s Hospital to meet his baby sister, Her Royal Highness, Princess of Cambridge.

Prince George already has his waving skills perfected. The adorable 21-month-old won over the crowds as he arrived at St. Mary’s to meet his sister, the princess, who was born this morning. George had been with his nanny, Maria Teresa Turrion Borrallo, while Kate Middleton gave birth. However, Prince William left the hospital to pick him up at Kensington Palace to meet his sister for the first time. As he left the hospital, Prince William gushed to reporters that they were “very happy.”

The father-son duo wore matching blue outfits, and Prince William was spotted kissing Prince George on the head as they walked inside the Lindo Wing of the hospital. Cuteness overload. 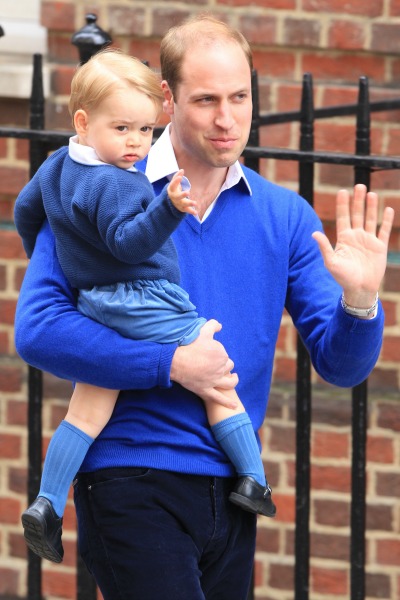 Kensington Palace just announced that the family will be leaving the hospital later tonight. “Her Royal Highness The Duchess of Cambridge will be leaving St. Mary’s Hospital, Paddington, this evening,” they announced on the official Twitter page.

The Duchess was several days overdue, but once her labor started it progressed rapidly. She reportedly had a natural childbirth, as she did with Prince George. The birth was announced via Twitter.

“Her Royal Highness, The Duchess of Cambridge was safely delivered of a daughter at 8.34 a.m. Her Royal Highness and her child are both doing well,” the statement on Kensington Palace’s official Twitter page read.

The royal baby name has yet to be announced. Prince William and Kate Middleton waited several days before revealing Prince George’s name after his birth, so we suspect they will follow the same protocol. Many royal watchers are betting on the name Alice; however, Alexandra and Victoria are other names that have been thrown around, and many are hoping that Diana is also included in the little girl’s name.

In the meantime, check out this video of Prince George and Prince William as they arrive to the hospital.

Royal baby born: Get all the details on the the Princess of Cambridge
Kate Middleton 5 days overdue: Will she be induced?
Huggies has a surprise for babies born on the same day as the royal baby