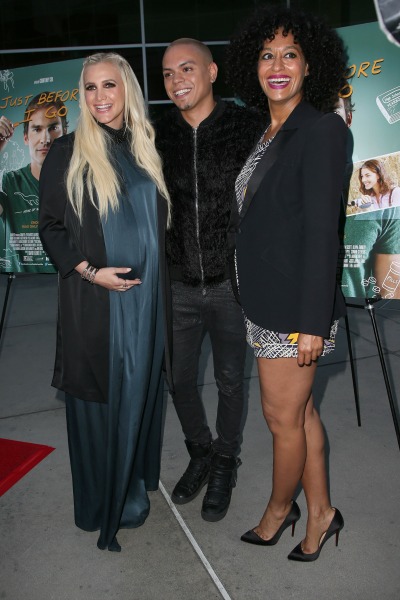 Ashlee Simpson showed off her baby bump as she posed with her husband, Evan Ross and his sister, Black-ish star Tracee Ellis Ross, at the premiere of his new movie, Just Before I Go.

Simpson is expecting her first child with Ross within the next few weeks, however, she has a 6-year-old son named Bronx with her ex-husband Pete Wentz.

The 30-year-old singer told reporters on the red carpet that she has been “feeling great.”

“She has to be the best pregnant mom in the world. Everybody talks about how hard it is but she is so easy and enjoys it and smiles all the time,” Ross gushed. Ross’s mom is iconic singer Diana Ross, so their child (a baby girl!) will have a talented gene pool — and plenty of friends to play with. Simpson’s sister, Jessica Simpson, has a son named Ace and a daughter named Maxwell.

Next up: Pregnant Naya Rivera rocks her baby bump