We’re all familiar with the concept of “paying it forward,” but one waitress received the tip of a lifetime all because of one little boy.

Early last week, a waitress went to close out a tab and found that the patron — a man she knew well — had left her $3,000 on a $43 bill, an act of generosity so extraordinary that it required a little explanation. She found that explanation on the back of the receipt: 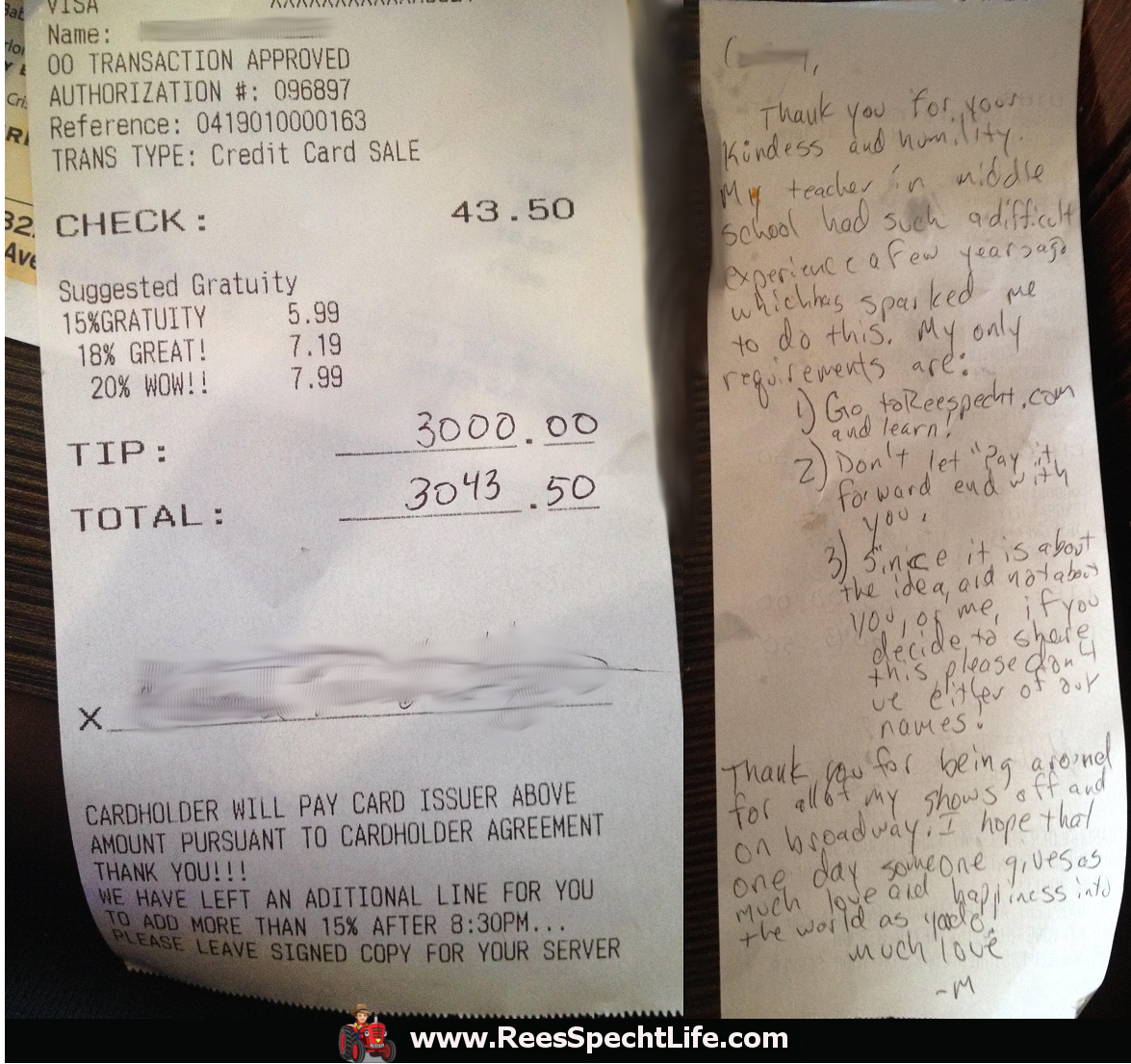 The note reads in part:

“My teacher in middle school had such a difficult experience a few years ago which sparked me to do this. My only requirements are:

1. Go to reespecht.org and learn!
2. Don’t let ‘Pay it forward’ end with you
3. Since it is about the idea, and not about you, or me, if you decide to share this please don’t use either of our names.”

The patron’s teacher was a man named Richard Specht. The “difficult experience” the note refers to is the tragic drowning death of Richard and his wife Samantha’s 22-month-old son, Rees. In the aftermath of this tragedy, the Spechts’ community came together to help the couple in their time of need but never accepted any form of payment.

The couple decided to honor their son’s memory by paying that kindness forward instead. Three years ago, they started the ReesSpecht Life foundation and began printing cards with Rees’ likeness on them to help create a legacy for their son. You can watch the Spechts explain the concept in their video:

They have also written a children’s book on the subject of paying life’s kindesses forward; it’s called A Little Rees Specht Cultivates Kindness. All of the proceeds from this book and donations to the foundation are reinvested in the community.

Those cards have now been distributed worldwide, and all the goodness done in little Rees’ name had extended far and wide before ending up on the tip line of that waitress’s tab. She was able to put two and two together and sent an email to Richard Specht himself, who wrote about his reaction on the foundation’s website, ReesSpechtLife.com.

“My mouth sat agape as stared at a picture attached to her reply that showed a restaurant receipt with a $3,000.00 tip on it… I literally did a double, even triple take. I then read the note that accompanied it…In staring at that receipt I never noticed the name and it wasn’t until I read the note did I realize that it was a former student of mine. I immediately recalled who he was and realized that I had him at least ten years ago…To think that someone I had a decade ago would honor my little boy or even remember his 8th grade science teacher in such a way blows me away.”

We’re blown away too. It’s difficult to imagine what any of us would do in the face of such a tragedy. The Spechts were able to find a little bit of light in the darkness of this terrible experience, and their lives were so touched by kindness that they wanted to touch other people’s lives too. What an incredible way to keep a little boy’s memory alive.

11 hrs ago
by Amelia Edelman