The royal baby could be born at any time, as sources reveal that Kate Middleton’s due date is today. The anticipation for the royal baby intensifies as the Duchess of Cambridge and Prince William prepare for their second child.

Prince George could get a sibling as early as today, as “well-placed” sources reveal to The Daily Mail that Kate Middleton‘s actual due date was yesterday or today. Although Kensington Palace has yet to confirm her due date, the duchess did reveal in London last month that her due date was “mid to late April.”

It is not uncommon for women to not have their child on their actual due date, and many royal-betters are putting their money on April 25 as the day the new royal baby will make his or her arrival. The palace is keeping tight-lipped and not revealing much more information than the duchess herself revealed.

“We haven’t ever confirmed a due date. The duchess herself said mid to late April, and there have been plenty of dates bandied around in the media, but we’ve never confirmed anything, and we never will,” they (rather huffily) told MailOnline.

In the meantime, Middleton is definitely gearing up to welcome her second child, as she is reportedly staying at Kensington Palace, which is a stone’s throw from where she will give birth at the Lindo Wing at St. Mary’s Hospital. 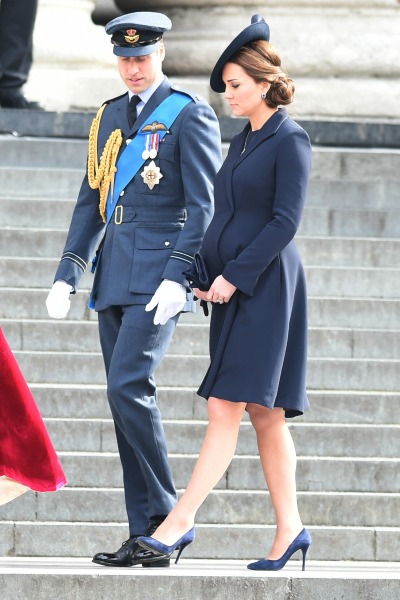 Prince William has finished his Air Ambulance training early and is currently with the Duchess of Cambridge.

“The Duke of Cambridge has completed the first phase of his in-work air ambulance helicopter pilot training with Bond Air Services earlier than anticipated,” palace officials said in a statement. “As he now will not have any further training to complete after returning from paternity leave, he will not return to duties with Bond until that time, and will remain on unpaid leave until then.”

So will Prince George’s new sibling be a baby girl or baby boy? Prince William’s father, Prince Charles, had said he hoped “it will be a girl this time.” The duchess has not revealed the gender, however many royal-watchers are betting on a baby girl. Middleton’s uncle, Gary Goldsmith, told Hello! magazine that he thinks there will eventually be a baby girl in the mix, but it might not be this time.

“I don’t think they’ll stop at two,” he said when asked how many kids they will have. “So if it isn’t a girl this time around, people shouldn’t be too disappointed. I’m sure there’ll be a girl in the mix at some point. As long as the baby is healthy, that is the important thing.”