Taking a photo with a kid and posting it on Instagram is awesome, but what if the kid has a super-crappy, misogynistic hat on? If you’re feeling that this isn’t a great idea, you’re not alone.

Thankfully the photo has now been removed, but it was originally posted by a member of the punk rock band Teenage Bottlerocket, as he poses with a young boy who wears a hat that reads, “SUP SLUTS.” “Check out this little guy,” read the caption. “He’s cruising for chicks.” 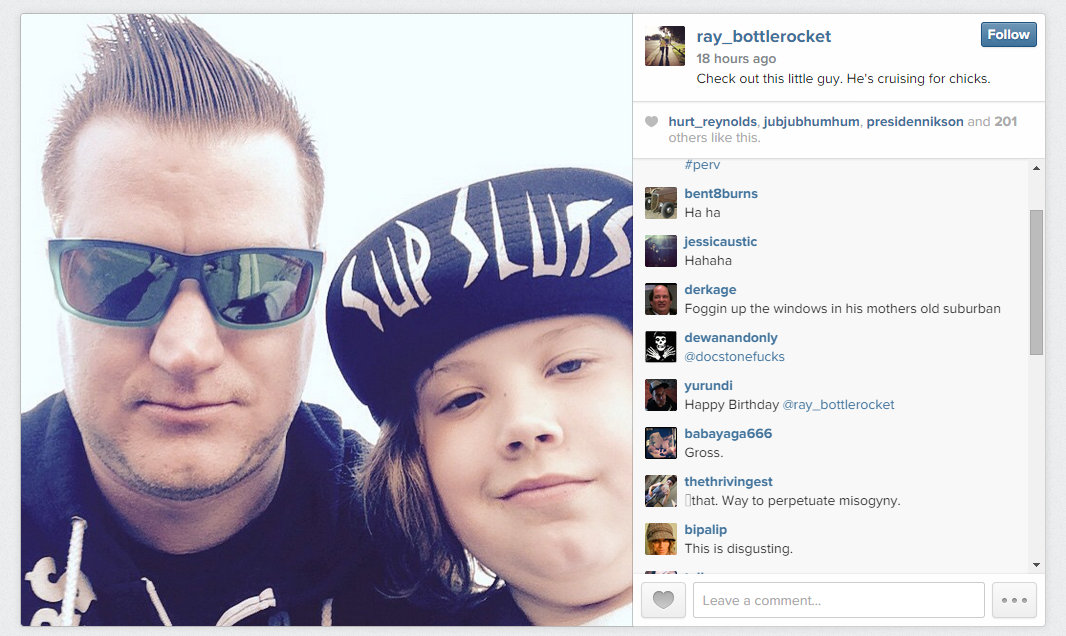 The first few responses are just as gross, if not more so. One person writes, “Foggin up the windows in his mothers old suburban,” which is a play on the lyrics of one of the band’s songs, unsurprisingly titled “Cruising for Chicks” (which is undoubtedly where the band man got the inspiration for his caption). It’s very ha-ha clever, right? Maybe it would be if you were making a connection between music and life that wasn’t brutally stupid.

However, despite the first few comments, it doesn’t take long for the schooling to begin. The first negative comment was a simple word — “Gross.” And many more sing the same tune. “It makes me sick to know that while I’m teaching my son to respect and value women, there are people out there doing the exact opposite,” another comment from Instagram user tallsoxx read. “This kind of thing makes me very scared for my daughter.”

User spinkink_tattoos agrees and wrote, “Cruising for chicks? What is he, ten years old? Your child is cruising for sluts? He’s cruising to be a future ass hole. Can’t wait to have to teach my daughter to stay away from men who were raised to think this is acceptable behavior. Bravo.”

Whether or not this is his kid, posing with this boy and giving him a virtual thumbs-up does nothing more than applaud his shitty hat and the grody sentiment behind it. It’s not commendable to encourage kids to think that all women are sluts — why would anyone want to do this?

Instead, you raise your sons and daughters to respect other human beings, regardless of sex or gender.