The toy aisle can be a scary place (beyond the frequent high prices). The majority of toys today are marketed to kids based on gender, as if girls would never be interested in tools — unless they come in hot pink — and boys would rather eat worms than play with a doll. But as most parents know, kids’ interests aren’t guided by their gender, but by what they genuinely like. If only toy companies would get on board with that and quit trying to stuff kids into specific pink and blue boxes, many of which stifle creativity.

With so many toys out there (and many of them missing the mark), it’s difficult to decide where to start. I’ve chosen one loser and one winner so you can see the wide divide that is out there when it comes to kids, toys and gender.

LEGO is a personal favorite around these parts. They have the ability to inspire and to fuel creativity and STEM-related activity. And yet LEGO really misses the mark when it markets to girls. Breaking away from its gender-neutral past, LEGO started LEGO Friends, a line just for girls — complete with saturated pinks and purples. Recently it has taken it a step further by offering up “beauty tips” for girls in its most recent LEGO Club Magazine as well as a beauty spa for elves (because we all know if it’s one thing elves are all about, it’s getting massages and facials). Oh, LEGO. You had the opportunity to create female Supreme Court Justice minifigs, and yet you pass that over to push tired old stereotypes that girls would prefer beauty to brains? This isn’t the way to get more girls interested in STEM. 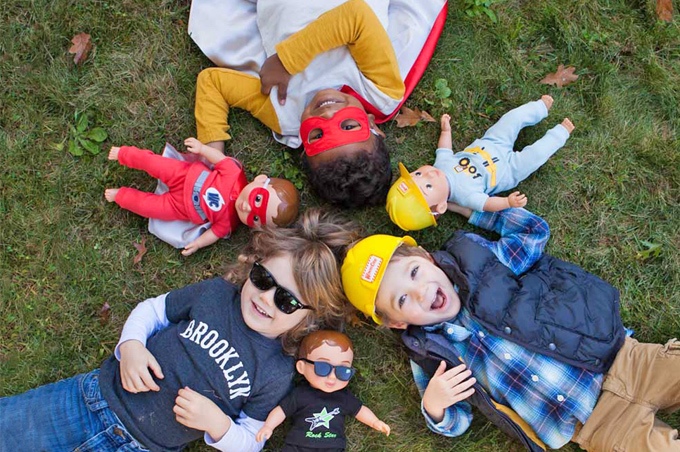 This new company — currently crowdfunding to reach more people and create more products — is offering up something rarely seen: dolls specifically for boys. Not action figures, not stuffed animals. But actual dolls. Because — gasp — boys can love dolls too. (Side note: “William’s Doll” from Free To Be You and Me is a beloved song in our house, and my son never understood why boys couldn’t play with dolls. If only adults had the same incredulity.) The company’s tagline explains it all: “More than Just a Toy — Expanding Boys’ Play!” WonderCrew founder Laurel Wider is a psychotherapist who has seen just how real the struggle is for many boys and men when it comes to the concept of idealized masculinity.

She developed Will, the prototype doll of WonderCrew, specifically as a toy that allows boys to not only have a buddy, but one that provides an outlet for feelings, thinking, action and imagination-based play. From WonderCrew’s About Us page:

“Studies show that strong relationships and the ability to connect emotionally are key to happiness, health and even career success. Yet the only place for children to find toys with a human face that encourage friendship and empathy is the ‘pink aisle’ — sending the message to many boys that this kind of play is not for them. While children, especially boys, idealize strong muscle-bound action figures, Crewmates help them tap into their real strengths and abilities. At Wonder Crew, children are the leaders, teachers, caretakers, problem solvers and dreamers of their own adventures.”

The Mamafesto: When it comes to students and gender, Texas has it all wrong
The Mamafesto: Female executive apologizes to the mothers she worked with
The Mamafesto: Sorry, but feminism isn’t to blame for family ‘breakdown’