Thanks to handheld gaming systems, tablets and smart phones, kids can game on the go. It opens up a whole new world of parental sanity, but it also opens you up to a lot of judgment from adults who think screen time is melting kids’ brains.

To the haters I say: Sorry not sorry.

Why? Because people who think kids should go to restaurants and ride in the car and sit in waiting rooms without distractions, the way they did growing up, also don’t want to listen to your kids whining and being loud and screwing around the way kids do when they’re bored. Why forgo an awesome chance for kids to be entertained in boring situations just because people can be major sticks-in-the-mud about screen time?

I’m a single mom, and I’m not throwing that out there as an excuse, but I’ll be the first person to admit that gaming systems have saved my sanity on multiple occasions. My small family spends a lot of time in waiting rooms at doctor’s appointments and therapies. My kids are only allowed to play video games on weekends, but if we have to do something that sucks for kids, you better believe I’m packing their Nintendo 3DSs. And if we’re going to a family dinner at a restaurant the kids don’t really like, I’ll let them play while we’re waiting on our food. It buys me the time to talk to other adults and it saves everyone from having to listen to me hissing at my kids to get their acts together.

Last month, my son had to spend 24 hours at the hospital having an EEG. The only reason he looked forward to it was unlimited video game time on his Nintendo 3DS XL. Playing video games nonstop for a day or for several hours on a weekend doesn’t mean he avoids playing outside or reading books. It’s just another way to play — a convenient, quiet way to play.

Recently, as my two kids have both gotten into Pokémon and Zelda, video games have become one of the only things they bond over. After almost six years of sibling rivalry and fighting, watching them sit together playing their games warms my heart. They have actual conversations about things I don’t understand like legendary Pokémon and water types and air types. And it’s awesome. 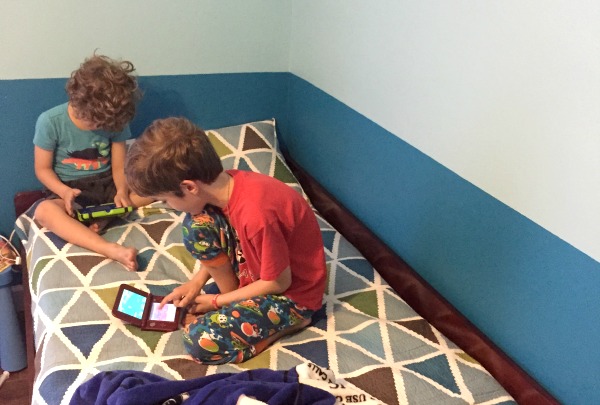 While I don’t know much about Pokémon, I grew up playing the original Nintendo NES with my brother — licking cartridges, racing Excitebike, trying out Doctor Mario puzzles, and shooting ducks in Duck Hunt. For parents who aren’t familiar with popular games, Nintendo has a cool site just for parents to learn about the games kids (and adults) love. It’s a good jumping-off point if you feel like your kids are speaking to you in a nonsense language.

Next time your kids play video games in a long line or in the cart at the grocery store, don’t feel like a bad mom. You’re a clever mom making the most of technology that makes it just a little easier to get by. Unless your children literally play video games every waking second, you’re doing just fine.

The writer received a Nintendo 3DS XL so she could try out the product. All opinions expressed in the article are based on the reviewer’s own assessments of the products.

Old Nintendo games that actually prepared us to win at life
Nintendo parenting: The family that games together stays together
Watch teens attempt to play original Nintendo (VIDEO)

60 mins ago
by Taylor Lane