Iowa mom Melody Lauer has brought the issue of carrying a weapon while babywearing to the front of the national conversation recently with the media attention surrounding her “Babywearing and Carrying” workshop. The workshop trains parents who wear their baby and gun at the same time to do it in the safest way possible.

In her blog, Limatune’s Range Diaries, Lauer describes herself as a “wife, mother and woman with a gun.” Part of her mothering involves babywearing, of which she is a staunch advocate. As a mother who routinely carries weapons while wearing her baby, she trains for the likely scenario that if she should ever confront an assailant, it will be with her baby attached to her body. She created the workshop to help parents like her learn the best way to prevent tragic accidents while protecting their family from harm.

While Lauer’s workshop may seem risky to some — why teach people to have a gun near a child at all — it’s actually just an extension of responsible gun ownership. If you own a weapon, you have an obligation to learn how to use it safely; otherwise you put yourself and others at risk. The police training motto “train how you fight” applies here perfectly — it would be wholly irresponsible to carry, wear and never practice doing both. 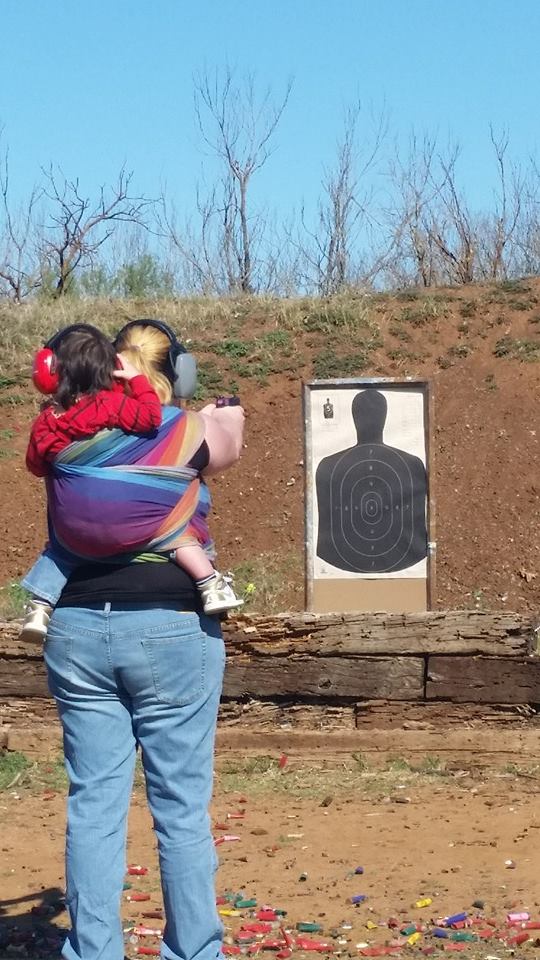 Lauer’s workshop strictly trains with empty and “dummy” weapons, but some parents take their training a step further and bring their children with them to the range. Texas mom of five Sara, administrator for the Facebook group Babywearing for Plus-Sized Mamas and member of the babywearing, personal protection Facebook group Sheepdog Mamas, routinely wears her baby when she practices shooting. “We shoot monthly as a family. When going to the range, I dress the way I normally do, which is sneakers, jeans, a T-shirt and a baby on my back. I have been asked many times why I practice with a baby on my back. My response is always the same. I can’t say ‘time out, let me put my baby down’ when there is a need to use my firearm.” 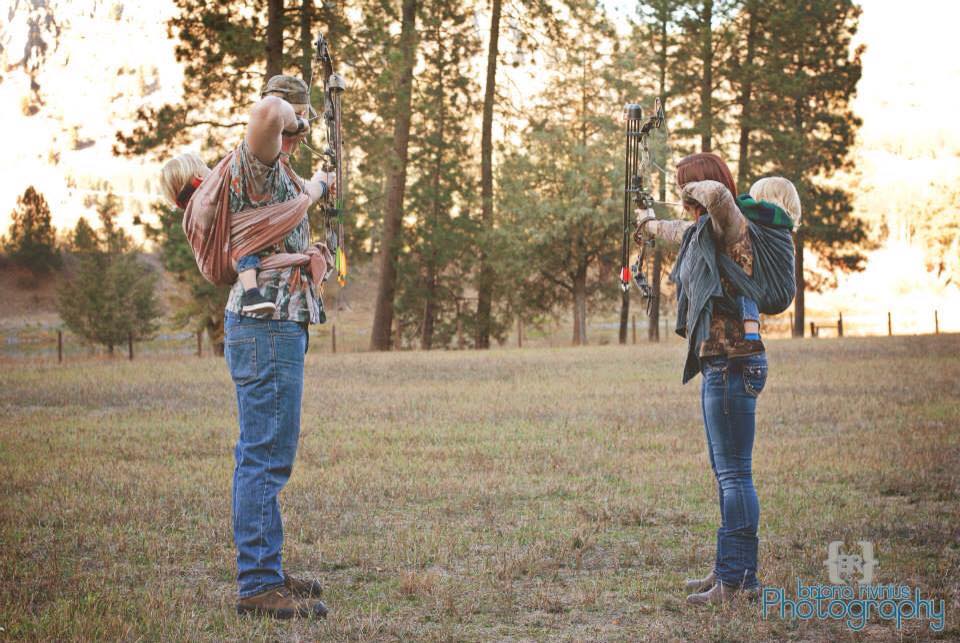 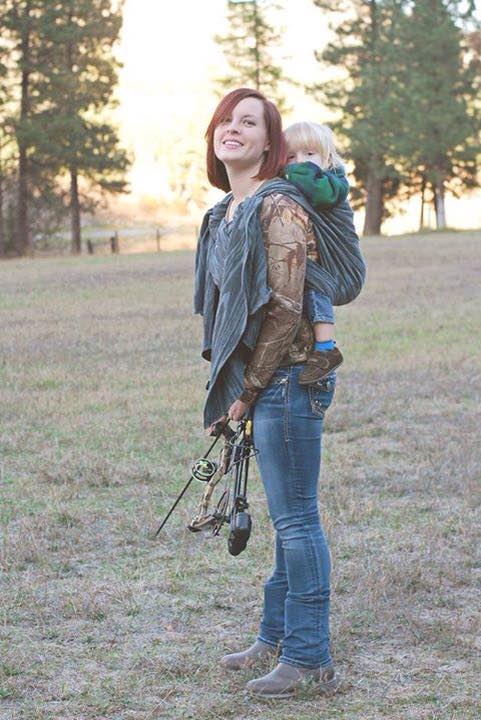 Weapons practice while babywearing isn’t limited to just gun owners either. Tara is mom to active twins and is an avid bow hunter. She and her husband routinely practice while wearing and have taken their kids with them while stump and turkey hunting. “Once they were about 8 months, we decided it was important they knew what hunting and trapping was,” Tara said. “Wearing them frees up my hands. Not only that, but I know where they are, and we can move so much faster.” Living in “bear country” as Tara does, that is a major consideration. She said her kids enjoy watching her shoot and even help by handing her next arrow to her. “Bow hunting takes work, and I want my kids to know what good, honest dedication means.” 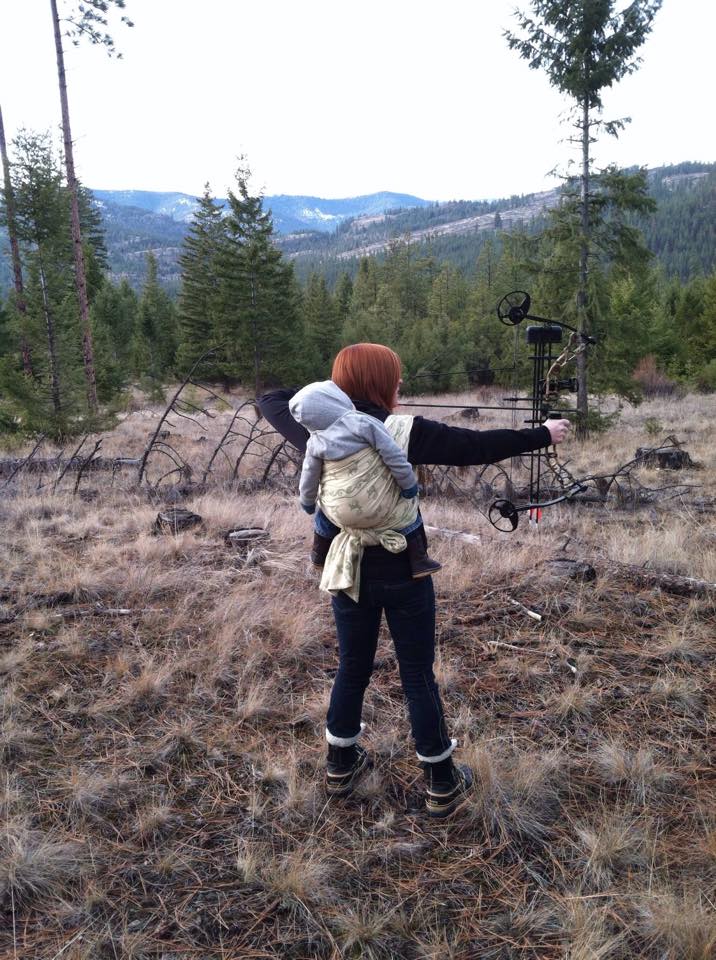 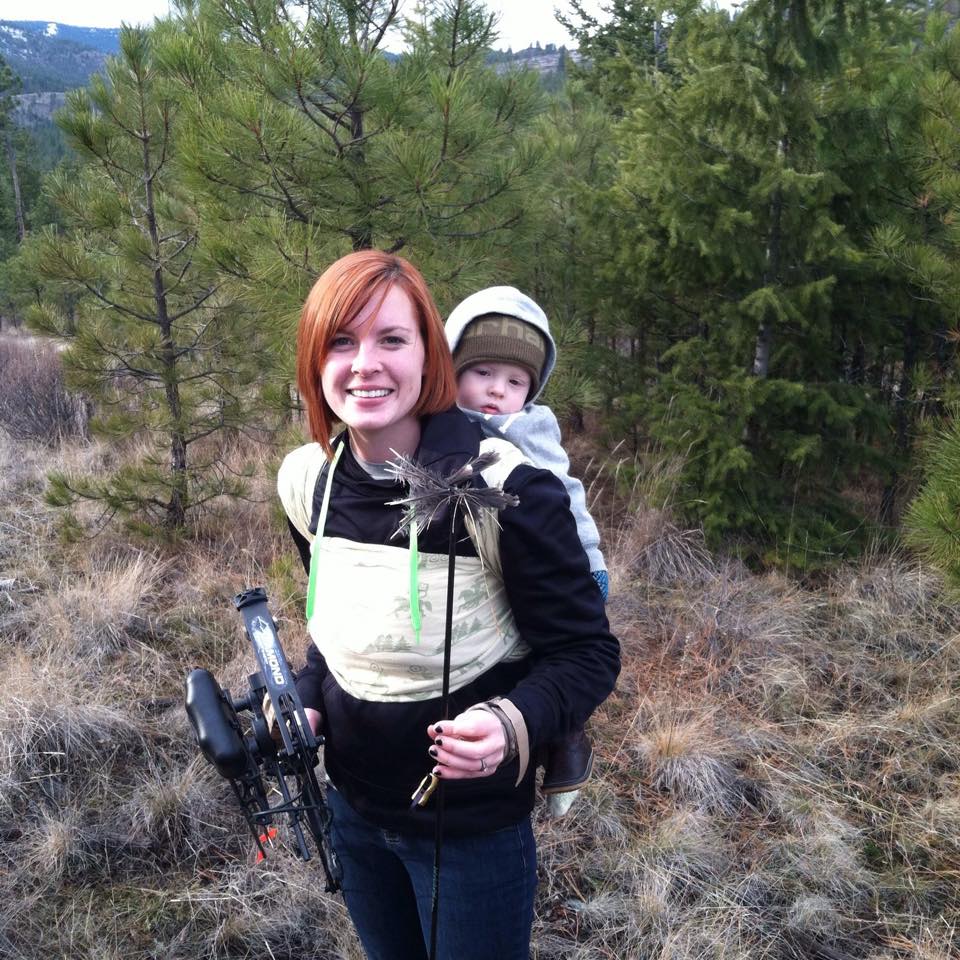 While most instructors will agree it is crucial to train in the manner you will likely engage an enemy, not all will tell you to take your baby with you to the range. “I don’t think it’s necessary,” says firearms instructor Mark Luell of Growing Up Guns. “The mindset, skills, tactics and gear issues can be worked with dry-fire (training with unloaded weapons) in the home. Home is completely absent of the loud noise and traumatic environment that a gun range would be to an infant.”

Mark sums up the training-to-carry-while-babywearing discussion perfectly: “The way in is training. Shaming mothers and fathers who have made the heavy decision to purchase firearms for their family’s protection will discourage education and training. Lack of training and ignorance are what cause accidents… proper training and education is the only way.” If you are a babywearing parent who also carries a weapon — a knife, pepper spray, stun gun, pistol, crossbow or even nunchucks — you have an obligation to train for scenarios involving babywearing. Anything else is irresponsible. Kudos to Melody for recognizing a parenting need and working hard to educate people how to wear and carry safely.