We rounded up the most buzz-worthy celebrity moms on social media including Christina Aguilera, who shared the most adorable photo of her daughter Summer Rain. Actress Jaime King announced she is pregnant, with help from her son James, while Liv Tyler welcomed a baby boy (and you have to see Grandpa Steven Tyler’s cute photo). New mom Blake Lively and Cindy Crawford round out our list of trending celebrity moms.

Christina Aguilera shared the first snapshot on her Instagram of her 6-month-old daughter Summer Rain in an adorable photo spread with People magazine. “So excited to share our baby Summer with the world. Thank you @PeopleMag! More great photos at people.com. Thanks @ElizabethMessina for taking the beautiful photos!” she captioned the photo, which shows her kissing her blue-eyed baby on the cheek. 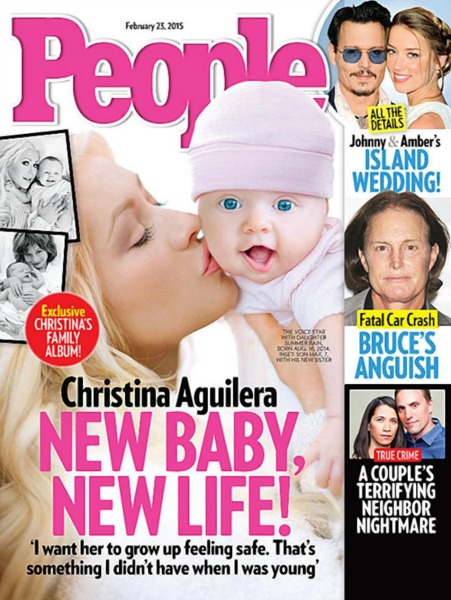 Summer is her first child with her fiancé Matt Rutler. She also has a 6-year-old son named Max with her ex-husband, Jordan Bratman.

Aguilera opened up about her daughter’s nature-inspired baby name to the magazine.

“Summer is a time of spreading warmth and light, while rain washes away … replenishes and brings new life to allow growth and new beginnings,” said Aguilera, who returns as a coach on The Voice this season.

“I wanted her name to be filled with inspiration, love and joy and that’s exactly what she brings to all who encounter her. Her beauty and sunshine exude from within.”

So excited to announce THE SEQUEL Coming later this year!! … #BabyTown2 – Created by @kyle_newman & moi! pic.twitter.com/HsHGeLLs6x

Hart of Dixie actress Jaime King is gearing up for a sequel, as in baby No. 2. King announced she is pregnant with her second child with her husband, Kyle Newman, in the most adorable snapshot.

The 35-year-old King posted a photo of her son, 1-year-old James Knight, blowing bubbles with a sign perched on his leg that says, “I’m gonna be a big brother! Who da boss now. I’m so excited!”

King has been open about her fertility struggles in the past, saying she has polycystic ovary syndrome and tried to become pregnant for over four years, resulting in five miscarriages, five rounds of in vitro fertilization and 26 intrauterine insemination before finally conceiving her son James.

No word if she used fertility treatments for this baby, however, we are wishing her a healthy and happy pregnancy.

“Love is love is love reflected ANOTHER,” he captioned the photo, which shows him standing next to Liv at the hospital with his other daughter, Mia Tyler. “God winked again…so proud of my Alpha Pup.”

This is Liv’s second child, however, her first with her boyfriend, Dave Gardner. She also has a 10-year-old son named Milo from a previous relationship.

Gardner posted this sweet snapshot as their newborn son grasps his finger:

No word yet on the baby name, however, we are sure this cute couple will pick out the perfect moniker for their baby boy.

https://instagram.com/p/zD2cHHR4P0/
New mom Blake Lively hasn’t posted a photo yet of her baby girl, rumored to be named James, however, she did share snapshots as she attended New York Fashion Week and, no surprise here, she was gorgeous and glowing.

“Best date ever. My mama,” she captioned the photo, as she hugged her mom while wearing a figure-hugging black and white dress.

Lively gave birth to her first child just two months ago. Her daughter’s name was originally reported as Violet, however, her husband Ryan Reynolds told reporters that was not the name, but declined to reveal the actual name. E! News is now reporting that they named their daughter the unusual name of James.

By now you have probably seen those un-Photoshopped images of Cindy Crawford making the rounds (if not, check it out here), however, the model has yet to comment on the photo, which shows the 48-year-old mom in a bikini for a photo shoot for Marie Claire Mexico.

Her husband, Rande Gerber just posted another photo of Crawford in a bikini and it looks a lot different from the Marie Claire photos, making us wonder if maybe the Marie Claire images were Photoshopped to make her look worse? Or perhaps it was the lighting? Or perhaps Gerber worked his own Photoshop magic on this photo? Regardless, we think Crawford looks pretty darn amazing in both photos.

She got flowers and I got her. Happy Valentines Day @cindycrawford

“She got flowers and I got her. Happy Valentines Day,” he wrote.