Happy Wednesday Hump Day — also known to us as Celebrity Baby Bump Day. We rounded up the cutest pregnant celebrities of the week including Kate Middleton, who is really starting to show now that she is in her seventh month of pregnancy. Ashlee Simpson showed off her baby bump on the red carpet with her cute son Bronx, while Kimora Lee Simmons celebrated her pregnancy with a baby shower. Keira Knightley rounds out our list of the most buzz-worthy baby bumps of the week. 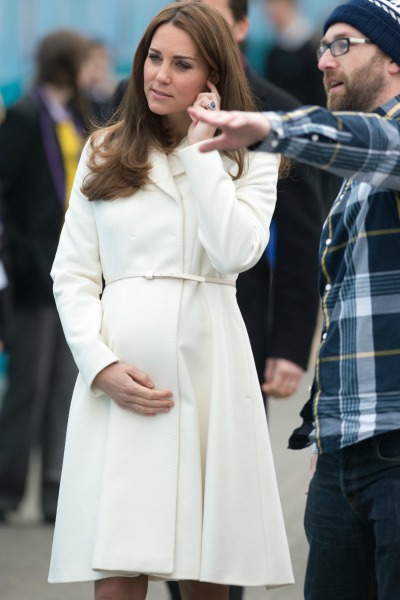 Can you believe Kate Middleton is already seven months pregnant? The Duchess of Cambridge showed off her growing baby bump in a white Max Mara coat paired with black heels as she visited Spinnaker Tower in Portsmouth.

Due in April, Middleton greeted fans and appeared glowing and well rested, as she and Prince William, along with their adorable son Prince George, recently took a family vacation to Mustique. The cute family was joined by Middleton’s parents, Carole and Michael, as they were celebrating Carole’s 60th birthday.

The Duchess enjoyed a special non-alcoholic “Mother’s Mocktail,” made by the bar manager at the Goring Hotel. “He’s making it from maple spice, passion fruit syrup, pineapple and ice. It’s touching that Carole is having a cocktail specially designed for Kate so that she doesn’t feel left out while everyone else is drinking,” a source told E! News.

Middleton, 33, will continue to make public appearances until mid-March when she will rest and prepare for the arrival of the royal baby boy or girl.

Next up: Pregnant Ashlee Simpson poses on the red carpet with her son Bronx

11 hrs ago
by Jennifer Mattern

12 hrs ago
by Kimberly Zapata

Ashley Graham Admits to Having Sex in Front of Her Baby — & Honestly, We Get It

12 hrs ago
by Amelia Edelman