Kids have some of the most adorably funny takes on the world, but ask them about money and their responses are as good as gold. 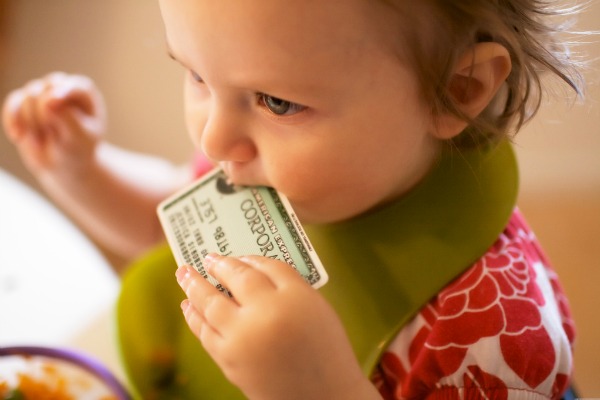 A report released by the Commonwealth Bank has found that when it comes to money, kids are pretty clueless. It looks like we’ve got to pick up our game when it comes to educating them about where money comes from and how it’s used.

The banks surveyed 500 children aged 5 to 16, as well as 500 parents, and the results showed that kids have an interesting understanding of money, especially since we’ve come to depend on a cashless society.

No longer are we as consumers handing over colourful notes when we make a purchase. Kids, traditionally, were able to physically see the trade between one thing and another. Now we swipe plastic cards or make purchases online, which means kids see what money pays for, but they don’t actually see the transaction take place.

More: Fun ways to teach your children about money

While the children’s responses to money — what it is and how it’s used — are truly adorable, it does stop and make you think how we should be educating our kids about money in the face of economic change. The head of the Commonwealth Bank’s school banking program, which has been running since 1928, says we have to familiarise children with different forms of money.

“With cashless purchases becoming increasingly common in day-to-day spending, it’s essential we start teaching children the value of money in both digital and traditional forms,” Veronica Howarth said. As clueless as these responses to money are, they’re still adorable.

More: 7 Attitudes and beliefs you should be modelling for your kids

1. Money comes out of the wall for free

Almost half of all 5-year-olds in the survey thought that money comes out of a machine on the wall for free when you insert a plastic card.

2. Someone is hiding inside the ATM to give their parents money

One-third of the kids within the same age group thought there was a person inside the machine who hands out the money.

Many of the kids surveyed had no idea that money was used in transactions to buy groceries.

4. All toys and games are free online

Eighteen per cent of 7-year-old children thought that toys and computer games weren’t bought online, but were accessed free of charge.

5. But sooner or later, they’re bound to realise the real value of money

And won’t that be a shocking reality.

How are you educating your children about money? Share your tips in the comments section below.

More on children and money

36 mins ago
by Maggie Clancy