Susan Biggar knows how important it is not to sweat the small stuff: Her eldest son, Aidan, was diagnosed with a serious, life-threatening condition called cystic fibrosis (CF) as a baby and doctors predicted he wouldn’t live past his 30th birthday.

When her second child, Oliver, was also born with CF, Susan — now mum to three sons aged 18, 15 and 11 — went from a normal mum fretting over everyday, insignificant worries into “gotta figure out how to keep the kids alive” mode. 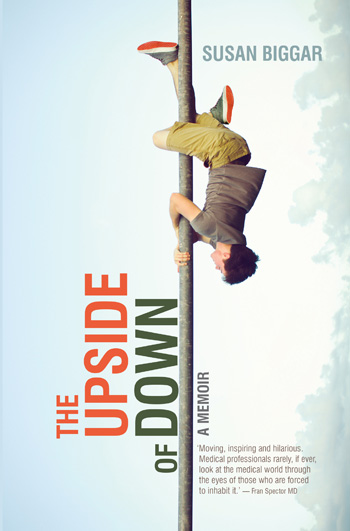 “The key to managing this illness is protecting their lungs from infection,” Susan says. “Thankfully, our kids have done really well, but it’s a tough road all the same.”

In her new memoir, The Upside of Down, she talks about living with serious illness, the reward and frustration of parenting, and the hard work of resurrecting a marriage.

In celebration of her book’s launch, Susan shares with SheKnows Australia some of the things she’s learned over the last 18 years as a parent to chronically ill children.

1. It’s crucial to focus on the things that count

“When Aidan and Oliver were young, they grew some nasty bacteria in their lungs, putting them in hospital together for two weeks. As much as possible, the whole family camped there with them. We did Sudokus, built Lego, played practical jokes, made popcorn and cuddled on their beds watching movies. Our sole purpose was helping them heal. At the end of the fortnight, we realised we had changed. We were learning the skill of concentrating on the important things. There are countless annoying and stressful things every day. Like traffic. And spam. And work deadlines. Living with a health condition that never gives up has taught me to focus on what matters and not get hung up on what doesn’t.”

What to do if your child is struggling to make friends >>

“After Aidan’s diagnosis, the medical team said he might live 30 years. I was paralysed by the dreadful prognosis, feeling angry and helpless. But my husband, Darryl, was optimistic. Initially, I was infuriated with him, believing he was unrealistic. But over time, I realised that anger and negativity weren’t going to help, nor was simply accepting a dismal prognosis. So, I began to focus on the good news stories, believing there was no reason Aidan couldn’t do as well or better. Eighteen years later, he (and Oliver) have thus far exceeded every good news story we had heard and, importantly, we have all learnt that living optimistically is healthy.”

3. I have to lead by example

“‘Do as I do, not as I say’ is a principle we can’t live without in our family. Ten years ago, I became acutely aware of the importance of aerobic exercise for protecting our kids’ lungs. We wanted them to run, play soccer, swim, trampoline. We knew if we stayed on the couch with a Coke and hot chips, they wouldn’t budge. So, we began to exercise together. Now, Aidan and Oliver are committed athletes, running, playing volleyball, hockey and just about any other game they can. Last year, Aidan ran 3,000 kilometres (averaging 10 kilometres a day). Actions speak louder than words.”

Times when your kids need you to have their back >>

4. There’s strength in numbers; get the support I need

“Several years ago, Oliver was diagnosed with a serious complication. We were told the devastating news that it was permanent. But a short time later, Andrea, a fellow mum of a child with CF, explained that her daughter had developed the same problem in adolescence, but now was cured. The doctors denied this was possible. We clung to Andrea’s lived experience and worked hard to get Oliver better. Eventually, he also defeated it. Since then, I have come to rely more and more on the community of friends who are also living with illness; they are my support team. We share each other’s joys and sorrows and bear the weight of it together.”

5. I must use my voice in advocating for the best care for my children

“Aidan was about 2 months old when I finally picked up the phone, shaking and sweaty, and called his doctor. ‘I’m sorry to bother you,’ I said, ‘I know I’m not a doctor, but I really think Aidan needs to be in the hospital. He is starving.’ He had been losing weight for weeks and weighed just two kilos at the time. There was a long pause. ‘Okay, bring him in. I will get him a bed.’ A week later, he was discharged, after gaining almost 50 per cent of his body weight. And I had learned the power and importance of my own voice in protecting my child and getting him what he needed.”