There’s no need to break the bank with expensive party entertainers, face painters and jumping castles at your child’s next birthday party. Instead, take a stroll down memory lane and organise to play some of these classic birthday party games from your childhood! 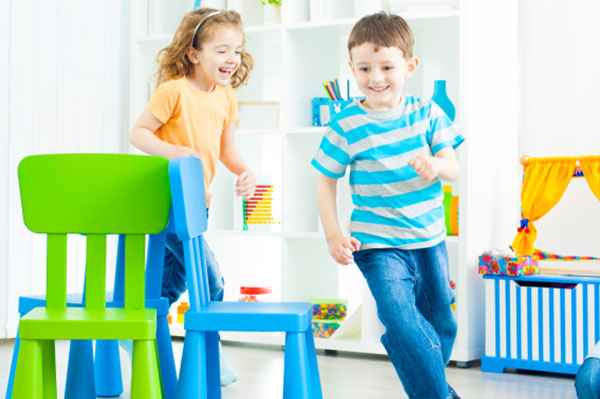 An oldie but a goodie! You begin by arranging a circle of chairs facing outwards, with one less chair than the number of players (so with eight players, you start with seven chairs). Mum or Dad cranks the music and when the tune suddenly stops, all players must rush to sit down. Whoever is left standing without a seat is eliminated. The last playing “sitting” wins a prize!

Treasure hunts can be played indoors or outdoors and you can gear their complexity according to your age group. For younger players, simply hide “treasure” — it could be wrapped lollies, plastic gold coins or other fun trinkets — in random hiding spots. For older kids, you can hide notes around the garden that lead them towards the ultimate prize.

This is a great game that entertains the kids and helps to gather everyone together when perhaps the excitement is leading little guests astray! An adult, usually Mum or Dad, assumes the role of Simon and gives basic commands such as, “Simon says touch your nose” and “Simon says jump in the air”. Players are only to perform the action when they hear the words “Simon says” before the command, otherwise they’re out. The player left standing at the end of the game is the winner.

We all know how pass the parcel works — it’s a classic birthday party game that we all remember from our childhood! It’s always great fun for the kids, but for parents, it can be tricky to make sure everyone gets a turn unwrapping the parcel. One way to get around this is to make sure the prize in the centre is something all of the kids can enjoy together, such as a bubble kit. This allows the kids to play their next game without anyone feeling left out.

One player stands at the front of the room as the “wolf”, with his or her back to the crowd, who are standing around 5 metres away in a line. The children yell out, “What’s the time, Mr. Wolf?”, and the wolf turns to face the crowd and shouts a time. For instance, 5 o’clock means the players take five steps toward the wolf. The group continues to take the same amount of steps toward the wolf as the amount of hours in the wolf’s time. When the group gets close to the wolf, he eventually answers their call of “What’s the time, Mr. Wolf?” with, “dinner time!” and runs after the group who are running back to the start line. The wolf catches one player in the group, who will then have a turn being the wolf. As an energetic and fun game, it’s a great way to burn off that sugar high!

Separate your party guests into two equal teams and give each child a plastic spoon. Each group lines up next to each other and when the adult yells “Ready, set, go!”, they must race, one by one, to a marked location and back. The catch? They must hold a lolly in their spoon the entire race — and if it falls, they have to return to the back of their line to race again! The first team to finish a full rotation of all players wins, although allowing all party guests to share the lollies afterwards is a great way to ensure everyone feels included.

More tips for celebrating your child’s birthday on a budget >>

This game is ideal for princess or fairy parties, although it can be adapted to work for any themed party. You simply fill a jar with marshmallows and invite little players to guess how many marshmallows are in the jar. The person who guesses a number closest to the amount wins and gets to take the jar home as their prize.

Pin the tail on the donkey

This game has evolved over the years to take on many forms: There’s pin the tiara on the princess, pin the nose on Mickey Mouse and the list goes on! Whatever version you’re playing, the premise is always the same: Each little player is blindfolded, spun around and invited to “pin” the missing appendage onto a large poster. Whoever pins the item closest to where it should actually be, wins. Simple as that!

A simple and fun party game, the balloon pop is suitable for slightly older children (aged 5 and up) as the sound of balloons popping can frighten younger children. You need to be playing with an even number of children so you can separate them into pairs. Have the children line up back-to-back holding an inflated balloon in between their backs and then, on your command, ask the kids to try and squeeze their backs together to pop their balloon. The pair that pops their balloon first is the winner.

The success of this game is all in the preparation, as you need 10 to 15 minutes up your sleeve to hide Minties all over the place! It works best if you have a nice leafy backyard or park to hide bright white-wrapped Minties under trees and behind rocks. You can really use any type of wrapped lolly, although Minties work best as they are firm enough to survive a few hours in the sun. Best of all, the kids can take home the lollies they collect as their lolly bag!