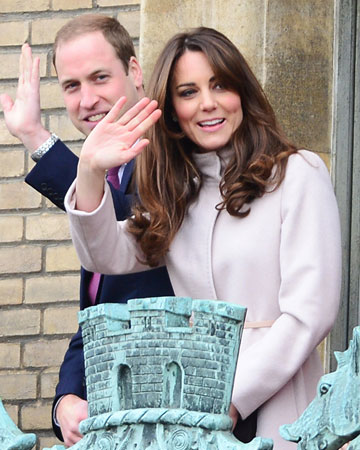 Guessing baby names is always fun, especially when it involves royals. Charles, Diana and James might all seem likely, but Kate and Will are a modern couple, what if they go for an outrageously modern name? We take a look at some of the weirdest names of the last couple of years and whether the royals could be influenced by them.

Unless you’ve been living under a rock the size of… nope, no rock on earth is big enough to have forced you to miss the news that Will and Kate are expecting.

Related story Princess Charlotte Now Has the Hair & Attitude of a Teenager, According to Prince William

Naturally, many people are lining up to guess the name of the baby. Odds on John and Frances are highest at the moment, with Victoria, Charles and George following closely behind.

But doesn’t that all just seem a little dull to you? It sure does to us, especially with the amount of names sweeping the globe at the moment that are — ahem — rather more unique.

With that in mind we’ve collected a list of baby names that follow the current zeitgeists; names that are so up-to-date that no-one has even had to mispell them in order to stamp their own authority on them. We’re not suggesting there’s any chance that Will and Kate will name their child anything quite so outrageous, but it would be interesting, wouldn’t it?

Hashtag Jameson is named after the now-ubiquitous symbol that denotes a subject on Twitter. The name led to some rather predictable outrage on Twitter, with many people suggesting the child will get bullied in the future. The name is unlikely to catch on, particularly in royal circles, but Hashtag’s social media presence will undoubtedly be huge when she grows up.

In Egypt a man named his daughter Facebook in honour of the social media giant’s part in overthrowing the government there. Rather more noble than the whimsical Hashtag, it’s nonetheless hard to see the name as anything other than a product of the time we live in now.

Would the royals go for Facebook? Probably not. The copyrights would be a nightmare for starters, nevermind the fact that the baby would have no chance of coming first on Google, ever.

Is it wrong that we actually secretly quite like Like just a little bit? In a world so firmly caught in the grip of nihilism, negativity and hate, wouldn’t it be lovely to have more Likes in this world?

Unfortunately when a kid is named after a button on Facebook it takes the name into a whole different territory. Mr and Mrs Adler from Israel were searching for an original name for their daughter and, no doubt disappointed by the lack of originality of their Facebook friends, instead just took inspiration from Facebook itself.

Walid Elias Kai, a PhD in search engine marketing, demonstrated his dedication to the cause when he named his baby boy Oliver Google.

If Will and Kate are desperately searching, or indeed “Googling”, a name will they per chance find inspiration here?

In a cruel mix of irony and cynicism, the parents of Goodluck seem to have been wishing him the best with the very name that could well plunge him into a world of mockery.

Since the baby royal will be all crowns, jewellery, fame and fortune, we hardly expect that it needs such a well-wishing name.

Yoga is a relaxing and healthy hobby. But is it really a good baby name?

Six sets of parents in the United States certainly think so, which is actually down in popularity from eight in 2002.

Of course, the name Yoga would wonderfully represent how modern the royals are these days, showing their awareness of trendy fitness crazes, as well as representing a slice of the multiculturalism of today’s Britain.

Probably quite an unlikely name, then.

13 hrs ago
by Sarah Showfety