Many royals have been raised strictly traditionally, but William learnt a few different things that may shape his parenting style. 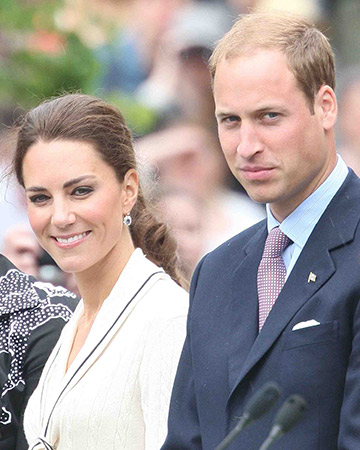 William and Kate’s royal baby is due mid-next year, but there is much discussion about the pregnancy (Kate’s extreme morning sickness), upcoming maternity fashion and the baby itself.

There’s no denying William’s happiness. Since the announcement, he has attended many engagements with a smile and thanked well-wishers — including accepting that now infamous “Daddy’s Co-Pilot” onesie just days before the big announcement.

When the baby arrives, however, all eyes will be on Wills to see how he raises him or her with Kate. As a child, his mother, the late Princess Diana, committed to being a hands-on parent and wanted to ensure he was raised differently to royals before him.

Here are a few ways SheKnows thinks Prince William will influence the raising of his baby, the third in line to the throne:

Wills was the first heir to the throne to marry a commoner, Kate Middleton. It was his mother, however, who took William out of the confines of royal life and allowed him to see daily life experienced by regular people. We also suspect that among the several baby names chosen, one might not neccessarily be from an aristocratic background thanks to Kate’s influence.

Among the many traits Princess Diana was known for, she was adamant that she would be a more hands-on parent. Wills and Harry were raised by both a nanny and their parents who spent much quality time with them.

We’ve already seen William by Kate’s side as she has dealt with her extreme morning sickness and he’s also remarked how much he enjoys spending time with the close-knit Middleton family. So, we’re sure he’ll do all he can to create the same kind of family unit.

William has experienced the worst of the paparazzi but he has also been among the first royals to be protected by a media ban while he was at school and university. There is no doubt he will be just as protective of his family and we’ll see requests to the media for privacy.

Education will be a major focus for Wiliam and Kate who both graduated from the University of St Andrews. Wills attained a Scottish Master of Arts Degree with upper second class honours in geography, the highest tertiary qualification earned by an heir to the throne.

There are endless images of Diana hugging her boys in public and the boys joking around with their father, Prince Charles. We’re sure that Wills and Kate will be just as affectionate, bucking the formal British persona of being “proper” and “stiff-lipped”.

William and Kate have both taken to public charity work, and Wills’ mother Diana was known for getting face-to-face with people, touching their hands and embracing them. There’s no doubt the new royal baby will be raised to be just as compassionate and charitable.