If your toddler’s daily diet currently consists of a couple of crackers, a glass of milk and a marshmallow, don’t despair — we’ve all been there! So, we present some proven advice for helping your toddler to get excited about meal-time… direct from parents who have been there and done that!t 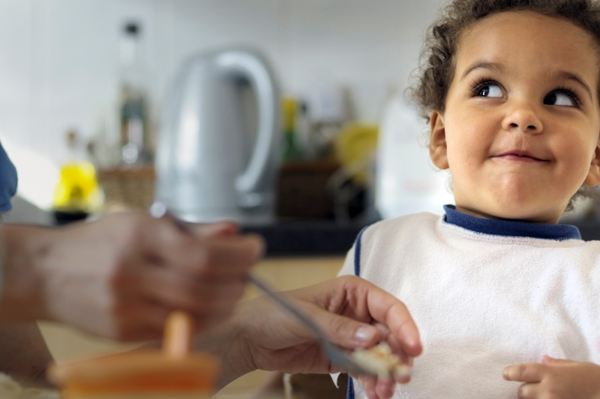 “Against all advice, we offer our toddler a buffet”

“My parents always told me, ‘Offer one thing and if she doesn’t eat it, she doesn’t eat’. It’s all good and well to say but it meant meal-time was an absolute nightmare for all of us. A few weeks ago we started offering our daughter Jessie options — she gets three bowls each night with different food in each bowl, such as peas and corn, mashed potato, grilled chicken, sausages and pasta. She gets to choose what she wants to eat; some nights she picks at it and other nights, she eats it all. We’ve found that giving her that little bit of control makes all the difference.” — Kasey, mum of Jessie, 20 months

“I nixed the snacks”

“At a two-year check up with the doctor, I was surprised to find out that Lily had low iron. The doctor asked about her diet and when I analysed it, I realised she was snacking on loads of low-nutrient foods — like biscuits, crackers, muesli bars and custard — and she was hardly eating much for lunch or dinner as a result. Now she gets no snacks between meals except for fruit, and her appetite for dinner has increased dramatically.” — Carolyn, mum to Lily, 2

“I mix it up at dinner time”

“My son would never eat his dinner — ever! — and we realised it was because he was bored! He’s almost 2 and he’s full of energy, so getting him to sit still for more than five minutes was a chore. So now, we don’t — we feed him finger foods like fish fingers, sausages, roast veggies and grilled cheese sandwiches that he can eat on the go. It’s a little messier, but at least he’s eating more!” — Madeline, mum of Oliver, 21 months

“All she eats is risotto”

“Right now, all my daughter will eat is risotto — and I’m perfectly fine with that, as she used to eat only toast and crackers! I try to sneak the veggies in so my go-to recipe is grated carrot, zucchini, sweet potato and pumpkin in a pot with sautéed onions and soup stock, mixed up a delicious risotto mix. I sprinkle Parmesan on top and she can’t get enough.” — Lisa, mum of Annabelle, 2

“Fritters dipped in sauce is our new winner!”

“I’ve recently discovered a great way to feed my little boy when he’s being fussy. I make fritters cut up into bite-sized pieces that he can dip in tomato sauce. It’s a great nutritional boost and so easy to make! I basically grate up some veggies and add ham, bacon or chicken, with some flour and milk and a couple of eggs. Pan fry one spoonful at a time and serve with sauce. Delish!” — Rhiannon, mum of Jacob, 18 months

“I stopped fretting about it”

“Our daughter has just lived on toast, milk and yoghurt for about four months, and I was fretting about it every day. Then all of a sudden, she gained an appetite — and two teeth! I think it was teething that was causing her to be so fussy, as she only wanted to eat food that felt soft. Now she eats everything including apples, noodles, cereal, spaghetti Bolognese, you name it. Sometimes you just need to wait it out.” — Laura, mum of Morrison, 16 months

Childhood obesity: Help your kids
Healthful kids’ breakfast ideas
Kids and calories: How young is too young to watch your weight?