It really doesn’t feel like all that long ago when I was at school and I distinctly remember the unbridled glee that I felt when I heard the bell ring to signal that it was time for lunch. We would charge out into the playground with our friends and feel such a sense of freedom at being able to break out of the four walls of our classroom — even if just for a short time. 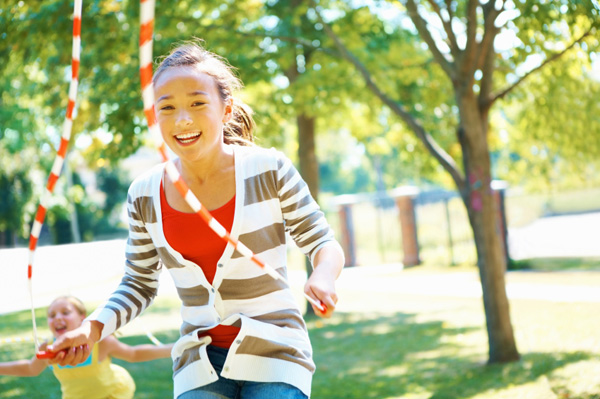 The children of today feel the same sense of excitement when lunchtime finally arrives, but how similar are the games they play to those that kept us occupied all those years ago? Spend some time teaching your child some of the favourite games from your childhood.

Who knew you could do so much with a long piece of elastic tied up at the ends? I am sure there were many mothers at home wondering why their very special dressmaker’s elastic kept disappearing, The girls would giggle as they jumped over, under and between the elastic that was stretched around the legs of two friends while chanting, “England, Ireland, Scotland, Wales. Inside, outside, puppy dogs tails!” The elastic would slowly creep higher and higher, and the game would end only when the elastic became so high that no-one could possibly leap over it without causing some serious damage.

No matter whether you wanted to jump solo, with a friend, or with your entire class, there was always a skipping rope game that could accommodate your desires. Skipping was serious business back in those days. It wasn’t just enough to jump cleanly over the rope, you had to master the art of “freestyle” skipping which required double jumps, twirling the rope to the side and above your head and hopping from one foot to the other. The ultimate achievement was when you could jump double Dutch — two ropes being swung at the one time by two very energetic rope turners! I never did quite get the hang of that one.

These devious little creations could cause some serious damage in the wrong hands! When anyone attempted “around the world”, everyone would duck for cover, just in case the yoyo didn’t quite stick to the natural orbit of the spinner! Yoyos took the world by storm in the ’80s and just about every company found a way to market their brand on these simple toys. Some of the really clever kids could “walk the dog” and “rock the baby” and many lunch hours were spent studying and perfecting these tricks.

When was the last time you tried to twirl a hula hoop around your hips? Or arms? Or neck? Hula hooping is incredibly physically demanding and yet there was never a shortage of girls of all ages wiggling their hips to keep their hoops dancing in the air. Maybe you even tried twirling multiple hoops for extra pizazz! You could roll them to friends, or fling them through the air and hope like anything that you might actually catch it when the hoop came hurtling back to earth! Who had time to eat when there were hula hoops to twirl?

Marbles was the ultimate gentleman’s game of the primary school playground. If you looked around and saw a group of boys hunched in a circle over a cluster of tiny glass balls, you could be sure that a deathly serious game of marbles was taking place. There were reputations at stake and prized collections to be swapped and won. Much like a modern-day football game, a bout of silence would certainly be followed by the crowd shouting in victory, or groaning in despair, as the King of Marbles would be decided over as many rounds that could be completed in one lunch hour. And you could bet your bottom marble that play would pick up from where it left off the very next day!

25 mins ago
by Arielle Tschinkel

2 hrs ago
by Racheal Pulver

22 hrs ago
by Brittany Loggins