Hearing your little one say that very first word is the stuff of every parent’s dreams. But did you know that what you feed your child may have an impact on their speech? 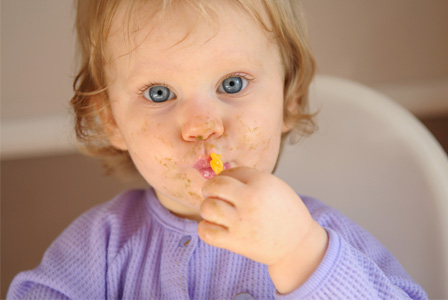 Introducing the right solids at the right time is essential for good speech development, so break out those finger foods and get talking!

Every child learns at a different rate. Developmental milestones cover a broad age range and for good reason — some kids are better at learning to walk while others are more interested in learning to talk.

While you’re watching and waiting for your bundle of joy to say that first “mama”, there are some proactive steps you can take to help work those jaw muscles. While we all know talking to your child will help them learn to “use their words”, did you know that what you are feeding your child could also be having an effect on their speech development?

According to Catherine Crestani, Principal Speech Pathologist at Nepean Speech & Language Services, a lot of oral-motor tasks such as chewing and biting are linked to speech development.

“For example, being able to move your tongue from side to side and up and down is important for both early and later sounds, so keeping your child on purees after 12 months can prevent the development and strength of muscles that help with speech,” she says.

Amanda Moore, speech-language pathologist and teacher, agrees. “It is important that your child be introduced to a change in textures from liquid to solid as their feeding skills develop,” she says.

“Different textures require different oral motor skills, which are important for speech development. Solid foods help by developing and strengthening the jaw, lips and tongue muscles which are required for speech. The lips are also helpful as they help to keep food in the mouth and are important for sounds that are produced with the lips,” she says.

It’s every parent’s worst nightmare. For this very reason, offering your six-month-old purees as a first food is an excellent and safe way to start solids.

However, there has been a rise in baby-led weaning in recent years. This process involves offering your child “table” or finger foods from day one. No purees or jars of baby food to buy — your little one eats just like you do right from the very start.

While this may sound appealing and it certainly works for a number of mothers, Catherine suggests leaving the finger foods until your child is around eight to nine months of age.

“It’s important to help your child develop their oral-motor skills before giving them food that is too challenging,” she cautions. “Start with a hard munchable, such as a long celery stick, at eight months followed by a meltable hard solid, such as a cruskit, at nine months. Then introduce soft cubes such as banana or avocado at 10 months, then soft table foods from 13 months,” she advises.

Amanda suggests that by 12 months your child should be eating family foods.

“From about nine months your child should be eating meat and fish, cereals, fruit and vegetables as well as breastmilk or infant formula,” she says. “By nine to 12 months fine motor control and pincer grip should have developed so your child should be eating the same foods as the rest of the family and ought to be encouraged to experiment with finger foods and self-feeding,” she suggests.

A child should start using words between 12 and 18 months, says Amanda. “There is usually a jump in the development of language before two years so if your child’s first words have not developed by 18 months it is important to make a conscious effort to spend time interacting one-to-one with your child.”

By two years of age, your child should be putting at least two to three words together.

“When your child is two they should start saying easy sounds such as ‘b’, ‘p’, ‘t’ and ‘d’ at the start and end of simple words,” says Catherine. “If you find your child is mainly talking in vowels — saying ‘c’ for ‘cat’ as an example — it may be time to get an assessment,” she suggests.

By three years of age, you should be able to understand what your child says without difficulty.

Long-term use of purees, bottles and dummies can hamper your child’s speech development. However, like everything, it’s all about moderation.

Offering your child finger foods, table foods and semi-solid foods is a great way to get that jaw moving and develop independence. These can be offered in conjunction with your child’s favourite puree without harm as sucking, biting, chewing and mouthing are all important behaviours that will help your child become more aware of their mouth and its ability to move and change.

15 hrs ago
by Isobella Jade