Stay-at-home mums may still outnumber dads, but we found several New South Wales families in which dad has taken the reigns as the primary carer. They give us an insight into why dads are deciding to stay home with the kids. 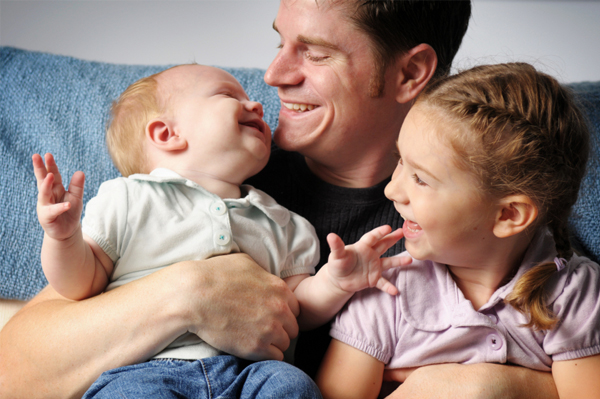 Michael became a stay-at-home dad in 2003 to his sons, then aged 2 and 4, after taking a voluntary retrenchment from his 23-year job at Commonwealth Bank of Australia (CBA), where his wife still works.

“Major considerations in my decision to leave the CBA and take up the role of stay-at-home dad were the cost of childcare, which was $70 a day per kid in 2003, and the childcare centre the kids were in was scheduled to cease operations in December 2003,” he explains. “Finding an alternative centre in reasonable proximity to home was proving difficult.”

With his boys now 9 and 11, Michael helps one son’s class with reading each week and volunteers at school sports carnivals. His wife sometimes wishes the roles were reversed, but supports Michael and enjoys having the flexibility to be able to work long hours if needed.

The great part for Michael — who several years ago, took up a mostly-weekend role as junior coordinator of a golf club and coaches two junior rugby league teams — is that he gets to spend so much time with the boys during their formative years.

“Being sports-focussed, I have introduced them to a range of sports, many of which they play now. Another good part of the role is being there when they get home from school each day. Fortunately, they both like school, so to have two happy kids arriving home around 3.30 pm each day is enlightening.”

Liam, 48, stays home with his son for one reason: his own father wasn’t around growing up.

His says his days are ‘totally run according to a routine” and involve household duties in addition to taking his son for a stroll or to a playgroup, which is made up of mostly mums who’ve been very friendly, Liam says. The days are not without their challenges, though.

“The challenges are the daily test to patience, the inability to make definite plans and keep to them and the daily challenge to your confidence, always asking yourself if what you are doing is the right thing at the right time,” he says.

Liam admits his choice has probably been “disastrous” for his career, as he’ll be over 50 by the time he re-enters the workforce and he’ll be behind on technology. He has accepted that he’ll probably have to take a lower position and salary, but he’s not too bothered.

“Friends and family see that [my son] is happy, clean, well-fed, in good health and, consequently, [they] support the choice my wife and I made,” he says. “The best part is knowing I am doing right by my son.”

Next: one more stay-at-home dad’s story