Every mom likes talking about her birth. But not every birth story is blissful. There’s an unspoken rule that women should keep the horror stories to themselves, but we’re going to break that rule today. Pregnant and worried? That’s your cue to look away. These veteran moms are here to share their battle stories. 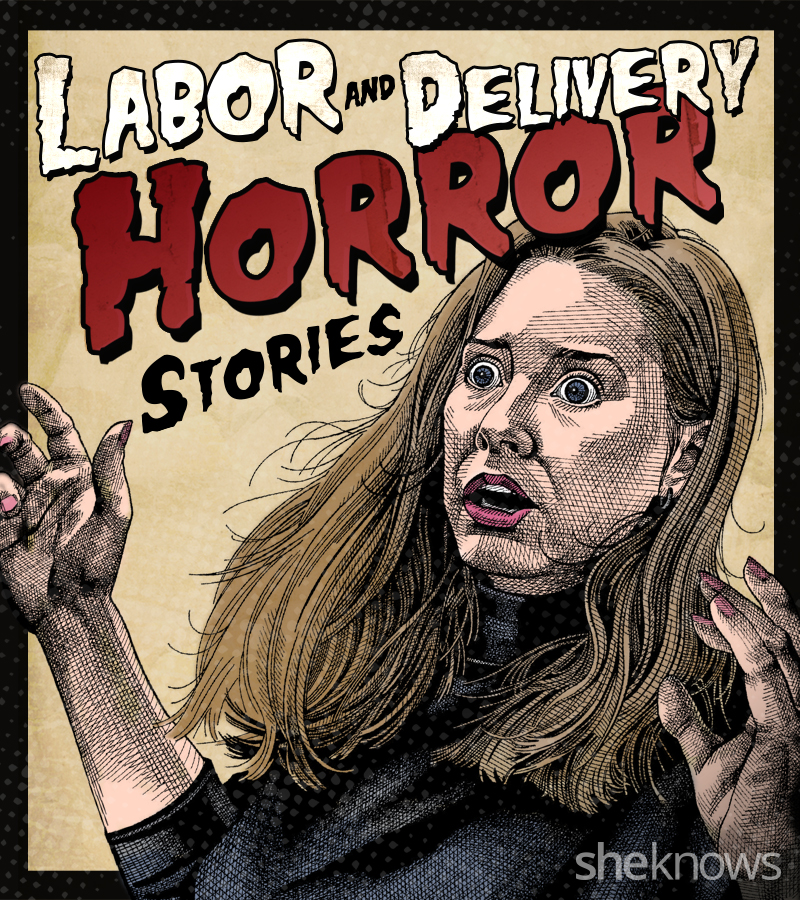 It’s only fair to open with my own story. My second childbirth was everything I wanted. No drugs, only a few hours of active labor. When I was ready to push, they kept the lights low. A nurse immediately handed me my slimy son, and he latched right away, and as I stared at his beautiful face, the midwife paled and literally ran out of the room to find a surgeon.

Because I had torn so badly she was concerned I might need my clitoris sewn back on.

Now that you’re clenching, I can assure you that everything is back in working order.

Giraffes under the bed

“I can’t even type it out because I will cry,” says Jana Anthoine. “Let’s just say it involved three and a half hours of pushing, a manual inversion, a broken tailbone and Ambien hallucinations of giraffes cleaning underneath my bed.”

April Cary had an emergency C-section after her baby’s heart rate became irregular. “Everything went OK,” she says. “Got home a couple days later and stood up from peeing to a massive rush of blood and fluid. My C-section had reopened itself. Six weeks of tape and wound vacs and daily nurse visits, and I was mostly back to myself.”

Terra Atrill attempted vaginal delivery of her twins but needed a C-section. She had a fear of things covering her face and was triggered by the anesthesia mask. “So I had a panic attack on a psychotic level, was hitting at staff and trying to tear the IVs out of my arms, etc. Because there were so many of them there — like, 20 staff members, due to it being a twin, pre-term delivery, as well as an emergency C — it was easy to slip from ‘this is scary and sudden and unplanned’ to ‘they’re trying to kill me’. I felt pretty… embarrassed, in recovery two hours later.

“Every time a vet show comes on with poor laboring cows and chains being tied to calves’ legs and hauled out, I point at my son and his lumpy head,” says Kerry Sauriol. It took suction, forceps and a dislocated tailbone to get her son out. She passed out once he was born.

After Carrie Hornbeck’s C-section, things went horribly wrong. “My abdominal muscle wall clamped down, and they could not get my uterus back in my body,” she says. “Had the OB, two residents, two nurses and the anesthesiologist trying to pull on my muscle layer enough to stuff my uterus back in, but it wouldn’t budge.” Four drugs later, they finally got it back inside her body.

Can you feel me now?

“My epidural fell out and no one believed me,” says Heather Skipper. “So the doctor said, ‘Do you feel this?’ and stabbed me in the stomach with a scalpel. That was during an emergency C-section.”

“I gave birth on a bathroom floor,” says Jennifer Levy. “In labor and delivery at the hospital, yet completely unattended.” Her baby’s father helped her deliver her own son. “Then they made us stay in the hospital for five days because our unattended birth made us high risk.”

“My bowels decided to let loose without my permission,” says a mom who wishes to remain unnamed. “I was mortified. Both my parents and my husband were in the room.” Her dad kept his distance. “I couldn’t speak but to say, ‘Get the nurse. I crapped myself. Sorry.’ And then the poor nurse had to clean me up.”

No meds and not by choice

Jean Olecki’s baby arrived about two weeks late. As her medical team prepped for a C-section, she crowned. “Too far along for an epidural or pain meds, I had her natural, within an hour. All 10 pounds and 14 ounces of her. I think they heard me screaming several towns over.”

More on labor and delivery

Gorgeous ‘G’ Names for Graceful Babes of Any Gender