Admit it — we’re all interested in the names celebrities give their children. Whether they give us inspiration for our own baby name choices or make us wonder what the world is coming to, they certainly get us talking. But what about those innocent infants themselves? Just how will Tom Fletcher’s little boy cope with his moniker?

More celebrity babies, more weird and wonderful celebrity baby names. Katie Piper’s name for her daughter, Belle Elizabeth, is sweet but the public haven’t quite embraced some of her fellow celebrities’ choices.

Twitter reacted so strongly to Tom Fletcher’s announcement that he and wife Giovanna had named their baby boy Buzz Michaelangelo that the ex-McFly singer had to assure the baying masses that it was, in fact, true.

They’ve yet to reveal the logic behind their rather interesting choices. La mamma’s Italian roots may have influenced the middle name but is Toy Story‘s loveable, but deluded, hero Buzz Lightyear or astronaut Edwin Eugene “Buzz” Aldrin the inspiration for the little one’s forename? Whatever the reason, we hope he can live up to his astronomical name.

Kate Winslet used this week’s interview with Ellen DeGeneres as a platform to defend her choice of name for her third child: Bear Blaze Winslet. Kate has revealed that Bear is named after the nickname of a childhood friend who was “a big bear hug” and that her older children Mia and Joe were included in the decision. As for the middle name she and her husband first met on Richard Branson’s private Caribbean island, Necker, at the time of a house fire. That explains it, then.

The thing is it could be a lot worse if Bear hadn’t taken his mother’s surname; Kate is married to Ned Rocknroll. Perhaps Bear can remind himself of that when he grows tired of being called Grizzly or Teddy… 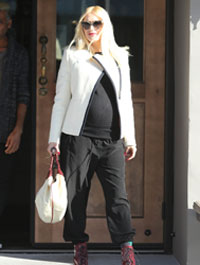 Gwen Stefani and Gavin Rossdale’s third son Apollo arrived in February and, with brothers called Kingston and Zuma, his non-traditional name was hardly a surprise. In fact, if he had been called Kevin or Derek it would have created more of a stir. Apollo derives from Greek Mythology, referring to the god of light, music and poetry. His middle names (Bowie Flynn) are his grandmother’s maiden names, Daddy has revealed. Will Gwen and Gavin’s youngest harbour ambitions of exploring space? Yes, deja vu. Are you picking up on an intergalactic trend here too?

Just when you may think that all celebrity parents have gone completely bonkers, here are two famous fathers who have — perhaps surprisingly — taken the traditional baby name route. David Walliams and his supermodel wife Lara Stone welcomed baby Alfred to the world in May 2013, and in February this year his Britain’s Got Talent co-star Simon Cowell and Lauren Silverman announced the much-anticipated arrival of their son Eric. With only nine months’ age difference, we can imagine little Alfred and Eric growing up as firm friends. The question is will they be hanging out with Buzz and Bear?

Scarlett Johansson and other first-time mums of 2014
How will Sam Bailey’s pregnancy affect her career?
Billie Faiers joins the list of 2014 celeb pregnancies

14 hrs ago
by Brittany Loggins

15 hrs ago
by Brittany Loggins