Just what happens when your lovely kids hit their teens? That bright eyed and bushy-tailed, enthusiastic child turns into a (probably spotty) teenager and, seemingly, a surly rebel overnight. 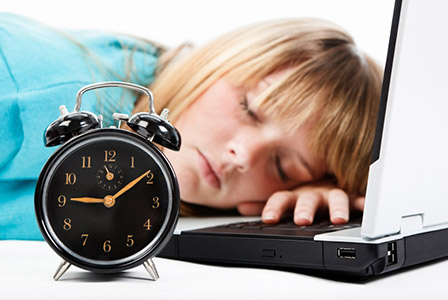 Weekend mornings chances are your adolescent former bundle of joy will be lying in bed, prone and unconscious. Try to disturb their slumbers and you may risk serious discontent. A cocktail of erratic teenage hormones is just bubbling away, determined to make itself known — but only after the clock has chimed midday! Then there are the dreaded weekdays when school or college beckons in the early morning. When they drag themselves out of bed and say “Life’s not fair,” do teenagers actually have a good case? Do they need an extra hour’s sleep to stay sane — and healthy?

In 2006 a study of the sleep patterns of over 300 Australian adolescents was carried out at the Swinburne University of Technology, Victoria and later reported in the Journal of Adolescent Health. It showed that teenagers typically sleep nine hours per night during holiday time and less than eight hours per night in term time. “With the impact of school schedule, students accrued a significant sleep debt, obtaining insufficient sleep for their needs and reporting lowered mood and daytime functioning,” concluded
Dr. Suzanne Warner, lead author of the report.

In 2009 tests by Professor Russell Foster, the chairman of circadian neuroscience at Brasenose College, Oxford, suggested that teenage students perform better in the afternoon, as their body clock is programmed about two hours later than that of adults over the age of twenty. Consequently it takes them a while to properly wake up in the mornings. However, as many schools nowadays start earlier than the traditional 9 a.m., often at 8 a.m. or shortly after, some academics and scientists believe there is a case for allowing teenagers to once again start school a full hour later.

Are sleep deprived teenagers at greater risk of diabetes?

It is not just teenagers’ body clocks and biological rhythms that may be upset by insufficient sleep. A recent Toronto study, reported in the October 2012 issue of the journal Sleep,  has established a link between sleep deprivation and insulin resistance in adolescents, which can increase the risk of early onset diabetes. The study involved 245 healthy high school teenagers, who averaged 6.4 hours sleep per night. According to Karen Matthews, PhD, of the University of Pittsburgh, Department of Psychiatry and the leading author of the report:

Optimum levels of sleep for adolescents

All these researchers agree that a teenager needs at least 7 to 9 hours sleep each night, though for teenage night “owls” it is even more difficult than it is for morning “larks” to get up feeling ready to start their day. So what can you do if your teenage children are waking up with the vim and vigour of a bear with a sore head? As well as telling them to avoid caffeinated drinks in the evening, it is sensible to suggest that they turn off the TV, the computer and games consoles well before bedtime. It seems unlikely that school schedules will change any time soon but perhaps you can change the attitude of your teenager to get them to go to bed with sufficient time for a decent night’s sleep.

How to stay involved in your teenager’s life
Is your teenager smoking?
Should you let your child have piercings

Trans Kids Deserve Better & Parents of All Kids Can Help

12 hrs ago
by Emilia Mense Caby