The toys that we purchase for our children may seem innocent on the surface, but do they mask hidden dangers which could lead to long term emotional disorders?

Whilst it is natural to want to splash out on the kids at X-mas, those innocent Christmas toys could have a detrimental effect on their mental health. A gift for under a tenner could end up costing you hundreds of pounds in medical fees as you seek psychiatric help to erase the damage caused by an innocent act of kindness.

She is perfect – blonde, leggy and slim with an hourglass figure to die for. Ask any woman and she will likely tell you that Barbie had a significant impact on her life. Barbie has a dashing boyfriend, lives in a beautiful home and drives a top of the range sports car. Children long to be her and fall under the misconception that being thin brings popularity and success. Girls may even link their first Barbie doll with the onset of anorexia nervosa or bulimia.

Kids love role play and these children’s toys are a great way to develop their social and cognitive skills. However, being constantly exposed to Daddy’s make believe cough and Mummy’s bad finger could lead to children inventing symptoms of an illness in order to gain attention and this could even lead to hypochondria in later life.

A couple of decades ago, traditional tea sets consisted of a teapot, milk jug, sugar bowl, cups, saucers and spoons. But with café’s appearing around every corner and Mummy desperate for her morning caffeine rush, toy manufacturers have accommodated our little ladies with replica coffee makers. Although they may pour the perfect “make believe” cup of coffee, this could lead to a craving in later life. Coffee is made from a complex brew of chemicals which can cause nervous disorders, accelerated heart rate and hyperactivity. 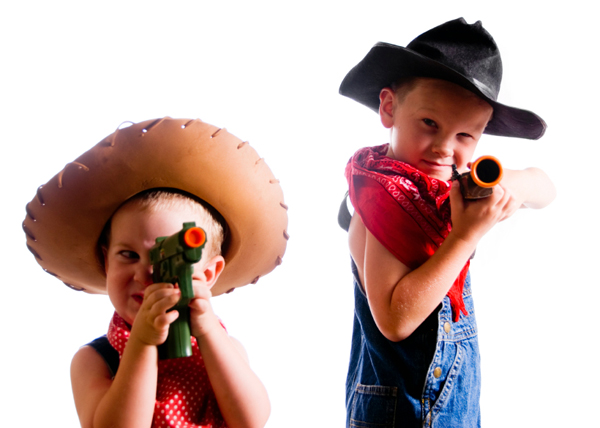 Many little boys this Christmas will hope that the parcel wrapped in shiny paper and placed under the tree is a gun or sword. Children’s toys which replicate weapons, especially those connected to violent games, movies or cartoons, are especially popular as they instil excitement and power into playtime. These Christmas toys can glorify violence with heroism and instil the belief that eliminating the “bad guys” from this world is a good thing. These toys could have a significant effect on the way that a child views the actions and beliefs of other people. This can accelerate aggressive behaviour and a lack of empathy toward people who may be less fortunate.

Players are sent on a rollercoaster ride of emotions ranging from fear and aggression through to adrenalin highs and finally, triumph. Although it may be wonderful to have a few hours of peace and quiet from little Joshua who has been begging you for this game since June, those few hours could turn into days or even months of barely seeing him as he retreats to his bedroom for his much needed fix. In later life, this addiction could lead to debt problems, sleep deprivation, irritability and poor physical health. This high level of mental stimulation could also cause severe damage to the nervous system, raise the heart beat and elevate feelings of anxiety due to the mind being constantly in fight or flight mode.

Children’s toys are laden with connotations which could turn them into a high risk factor. While they can bring a lot of joy, they can also encourage hard-edged social norms and deep-rooted misconceptions which can lead to long-term emotional disorders. Before buying, we should consider the benefits and meanings attached so that goodwill gesture only brings the happiness that was intended.