Despite being savvy and capable, today’s kids have it easy when it comes to chores. A survey commissioned by Whirlpool found that while 82 percent of American adults did chores as kids, only 28 percent of those adults make their kids do chores. What’s going on?

Related story To Be Honest: What Your Kid's Coach Wishes You Knew

Richard Rende, Ph.D., is a developmental psychologist and author of Raising Can-Do Kids: Giving Children the Tools to Thrive in a Fast-Changing World. According to Rende, kids who do chores get better grades, have better behavior and enjoy school more. These positive foundations help kids who regularly do chores become successful, capable adults. “When chores are on the decline, kids will miss out on these pretty amazing benefits,” says Rende.

So why are so many parents dropping the ball?

I know that in my household, it’s all about the whining. I’m a single mom, and when both my kids turn on the whining machines, it wears me down more quickly than I’d like to admit. I can’t escape the feet-dragging and sighs and complaining, and after a while it’s easier to unload the dishwasher and load the dryer myself.

Rende says that disagreements over chores are the biggest source of conflict between parents and kids. No matter what we do, it seems impossible to get kids to do chores. He doesn’t recommend allowances, nagging or yelling. Rende also cautions against trying to make chores “fun.” The fun simply doesn’t stick because — let’s be honest — chores aren’t fun.

When Rende told me he has a simple, three-step solution for making chores easier on parents and kids, I couldn’t resist giving it a try.

Step 1: Tone down the complaining

Kids are listening. In my case, my 6-year-old and 8-year-old heard me talk about how much I hate folding laundry and how much I hate steam-cleaning the floors. All they’ve ever learned was that chores really suck, so when I tried to foist those same chores off on them, they weren’t buying what I was selling.

For the past month, I’ve made a conscious effort to stop whining about chores. When I say effort, I really mean effort. Once I paid attention to what I was saying, it was amazing how often I started to complain. Toning down the complaining had the added benefit of boosting my attitude about housework.

Step 2: Talk about the good parts of doing chores

Good parts of doing chores? Before you laugh, think about how nice it feels when your kitchen counters are gleaming and your laundry is finally done. Really done. Think about how lovely it feels to sink into freshly washed sheets and how much easier it is to find what you’re looking for when you’ve organized and decluttered. Chores feel really good when they’re done. 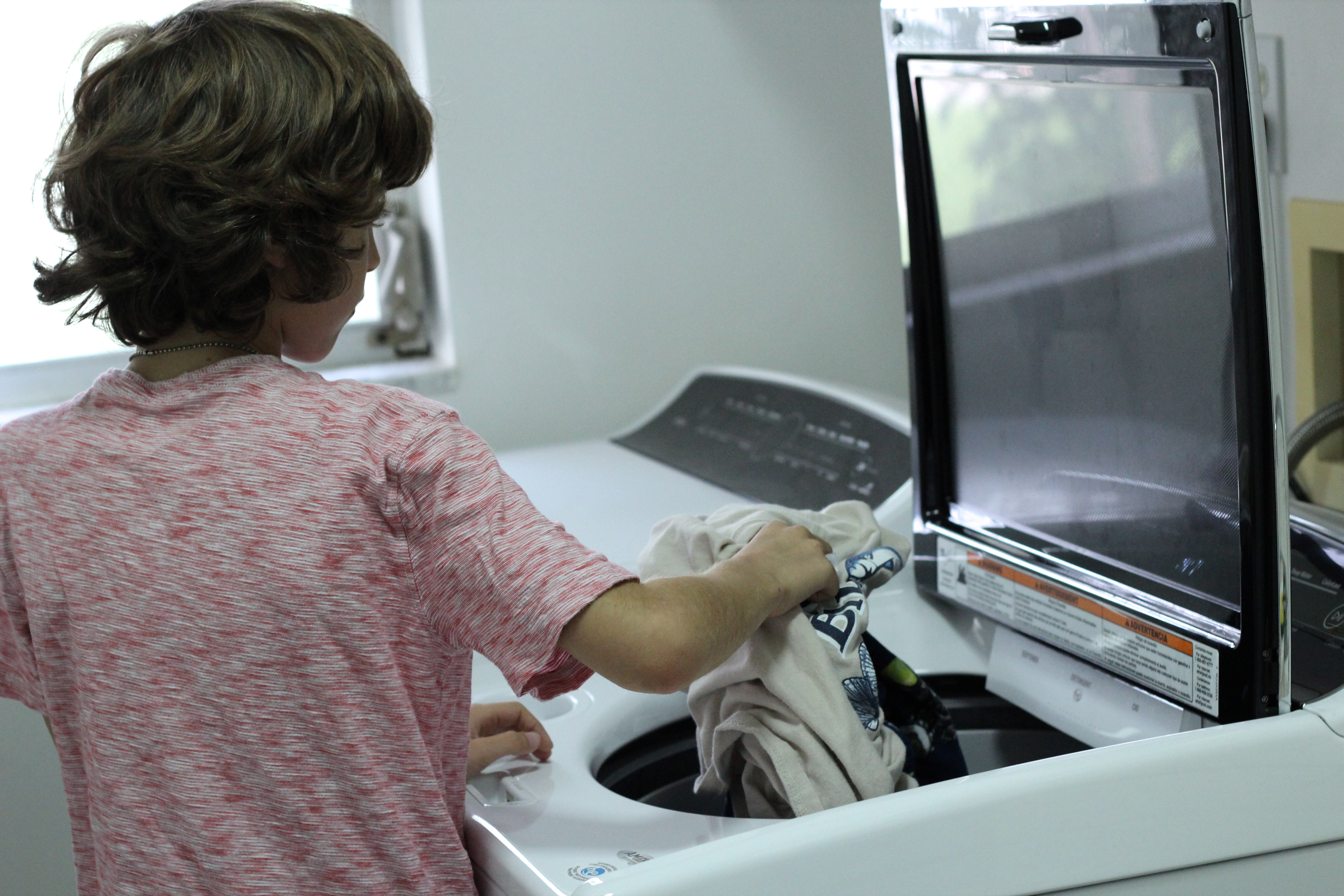 I began focusing on the positives of keeping up with chores and talking about them to my kids. They acted like I’d lost my mind at first. Why is Mama talking to herself? But after a while, I could tell they were listening. They seemed most interested in how much easier it was to play and find toys if they kept their rooms in order and how much more pleasant I was if chores were done and hadn’t piled up. Whirlpool sent me a Cabrio washer and dryer set to try out as I gave our chore routine a makeover. My 8-year-old immediately latched on to the cool controls, which reminded him of his favorite electronics. He’s taken over washing machine responsibilities, and the fact that the controls are so intuitive means I don’t feel so compelled to micromanage. 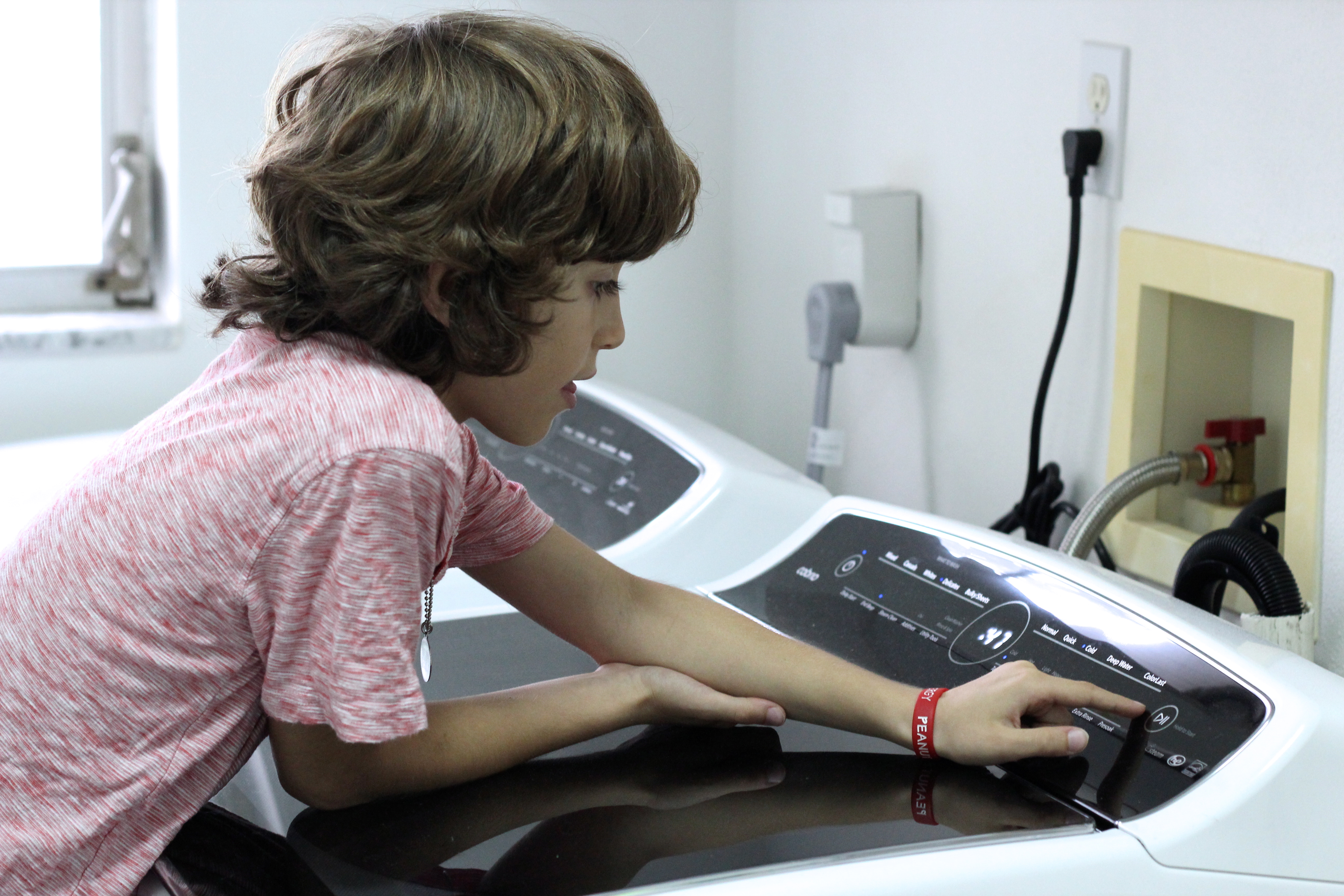 My 6-year-old prefers sweeping using a kid-sized broom. I found that allowing the kids to choose their favorite chores also fostered more positivity.

Step 3: Be a team, not a dictatorship

This was the easiest step for me to understand but the hardest for me to put into action. As a single mom, I absolutely understand the value of being a team. I often talk to my boys about how we’re in it together and how much I value their help. But in the face of whining, it was very easy to slip into cranky authority mode. “Give them the chance to do chores with you,” Rende advises. “Set a family tone of cooperation and gratitude for what you do for each other.”

I began making a point of doing chores while my kids did chores. When they saw me working too, they became less apt to complain. When I heaped real praise and gratitude on them, they responded more positively. This was a relief, considering I had previously been running out of bribes.

I know these steps aren’t a perfect, fail-proof solution, but they’ve been incredibly positive for my family. We have a long way to go toward my kids doing the number of chores I know they’re capable of, but for now, I’m not as embarrassed when their pediatrician asks me if they have an appropriate number of responsibilities around the house.

Hilary Swank Revealed The Super Meaningful Due Date of Her Twins