Love, Actually star Keira Knightley is reportedly pregnant and is expecting her first child with her husband, James Righton, who is keyboardist for the band Klaxons.

Actress Keira Knightley had that special glow during the Moët British Independent Film Awards on Sunday. Multiple sources, including Page Six, are chalking that glow up to the fact that she is more than three months pregnant with her first child.

The 29-year-old star showed off a hint of a baby bump in a cream-colored Rocha gown as she mingled at the event. The Pirates of the Caribbean star did not drink any Champagne, despite the fact that it was flowing as they were the main sponsor of the event. 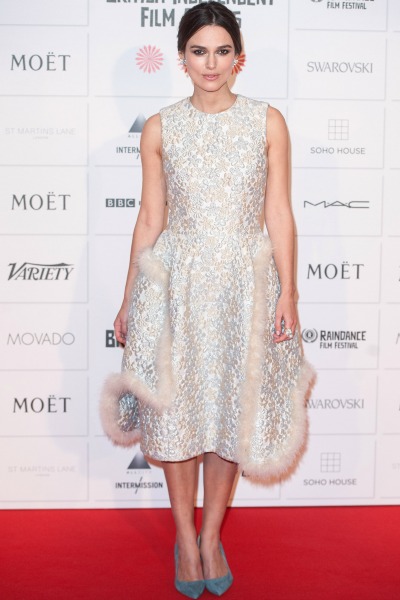 “Keira and James are thrilled,” a family member told Star magazine. “This wasn’t planned, but that is how they wanted it.”

The pregnancy is good timing for the couple, who married last year, as Knightley has just finished filming a movie. “She will be able to relax and settle into family life in London,” a friend reports.

Although no news as to the gender of the baby just yet, the star did tell Glamour in an interview this year that if she had a daughter, she would advise her against being an actress, calling the constant rejection “heartbreaking.”

“It can be completely heartbreaking for most people who do it, because the amount of rejection is enormous. And it doesn’t matter what kind of person you are, it’s impossible for that not to take a toll. So I would say to my daughter, ‘Be a doctor or a lawyer — something stable and useful.'”

The actress has been trying to hide her changing figure to conceal the baby news. “Keira and her stylist have been putting together looks that hide her growing bump,” the source reveals.

Now that the news is out, be prepared to see more of Knightley’s growing bump, as she earned a SAG nomination for best supporting actress for The Imitation Game.