Happy Wednesday Hump Day — also known to us as Celebrity Baby Bump Day. We rounded up the cutest baby bumps of the week including Kate Middleton, who has been wowing us with her maternity style while in New York City. Pregnant Jessica Biel made a rare appearance out with friends, while Blake Lively continues to prove that maternity clothes can be fashionable and flattering. Pregnant Carrie Underwood and Molly Sims round out our list of the most buzz-worthy baby bumps of the week.

Prince William and pregnant Kate Middleton are getting the royal treatment while on their three-day trip to New York City. Not only did they meet our “royal couple” (Jay Z and Beyoncé, of course) while at the Brooklyn Nets and Cleveland Cavaliers basketball game, but they also met “King” LeBron James.

The basketball star posted this picture on his Instagram page as he presented the royal couple with a Cavaliers jersey for 16-month-old Prince George. James raised some eyebrows with this photo op when he put his arm around Middleton, as that reportedly breaks protocol on how you are supposed to act around royalty. Very scandalous, we know.

The Duchess, who is due in April, dressed her baby bump in a grey Tory Burch coat paired with black jeans.

Middleton also visited the Northside Center for Child Development in Harlem, where kids were told a real-life princess was coming to visit. As it turns out, the kids thought she was the princess from the movie Frozen. Wearing a black coat and heels, Middleton (pictured at top) was photographed bending down to chat with one of the kids. What were they talking about? The Duchess was reportedly chatting with the kids about their favorite movie, which was Frozen, of course. 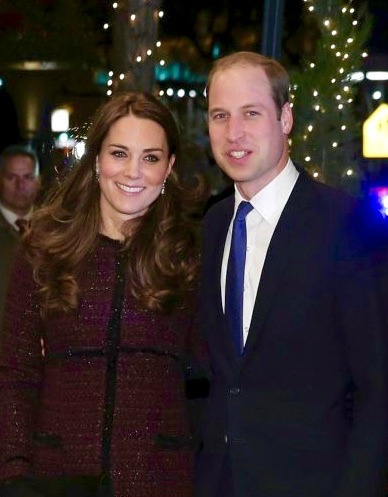 The Duchess was spotted in another chic look as she wore a plum Marina coat by Seraphine as she and Prince William made their way into Manhattan’s Carlyle Hotel. This coat was created exclusively for her by the designer, however you can pick up the Seraphine black turtleneck dress (Seraphine, $99) she wore under the jacket.

Next up: Pregnant Jessica Biel makes a rare appearance