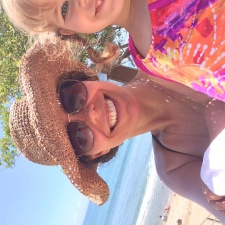 They say when a baby is born, a mother is born too… Mothers You’d Like To Friend was the afterbirth. In our new roles as mothers, we learned moms don’t have a lot of time, but they could sure use a laugh. Mothers You’d Like To Friend are itty-bitty, baby-sized bites of comedy to remind us that we aren’t alone. Yes, it’s awesome to be a mom. It’s also pretty hard. But it’s also pretty funny.

When my daughter was about 3 months old, I started getting antsy. Some of my new mom friends had already gone back to work and were out there making the world a better place, while I was bouncing on the ball with a drooling infant in my arms. My single friends were charging full steam ahead at career ambitions, travelling the world, getting raises and promotions, while I was still bouncing on the ball, unshowered, with one boob hanging out like a human pacifier. I didn’t want to go back to work full time, but as an artist, I needed to make my little difference in the world, so I wrapped the baby in a sling, got onto the ball and bounced over to the iPad, where I started writing. I wrote about the truth of the moment — the confusion, the frustration, the comedy of errors that is innate in first-time motherhood.

I walked a lot in the neighbourhood in the early months and met a neighbour who was pregnant with her second child. She was an actress, like me, and commiserated with my frustration about wanting to create while simultaneously taking care of a beloved creation that relied on us to survive. “Maybe we could create something together?” I mumbled, shuffling my feet and adjusting the Ergo with the precious load.

Another next-door neighbour was a cinematographer who was newly pregnant, and I couldn’t help giving her advice. I didn’t want to do it. I didn’t like hearing advice from know-it-all moms when I was pregnant (and anyone who had been a mom or even knew a mom seemed to have an opinion about what was going on inside my belly). But there I was, standing on her doorstep with a basket of figs from the farmers market, insisting she eat them for the health of her vagina. Then I would run home and scold myself for being a know-it-all, and as a form of redemption, I’d get onto the ball and write all about it. Not about me per se, but about the amalgam of all the know-it-alls, the naturalists, the first-time pregnant mamas trying to find their own way and the single friends whose carefree lives were often enviable.

Then our crew of professional actors and cinematographers who were mothers or soon-to-be mothers got together in between nap times and feedings and made some art imitating life. We’d take breaks to pump or feed and laugh about clogged milk ducts, and there was life imitating art — new mothers forging our own paths, diapers and burp cloths in hand. And that’s how our web series Mothers You’d Like To Friend was born.


Visit Mothers You’d Like To Friend to find out more about this series.

10 Ways to make pregnancy a breeze
Real moms confess: Unexpected pregnancy side effects
10 Things you will likely experience after you give birth