It’s been quite the celebration around the world as the Duchess and Duke of Cambridge welcomed their first child, heir to the British throne. During the pregnancy, many speculated what royal name they would give their prince or princess. 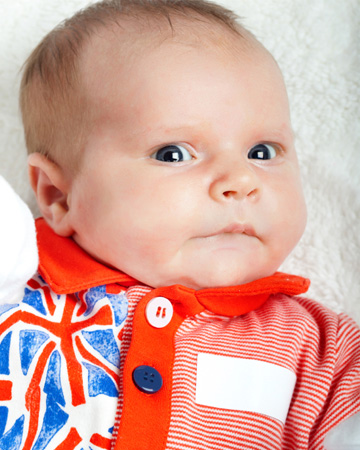 It’s no surprise they went with a traditional British name when they announced the birth of His Royal Highness Prince George of Cambridge. If you’d like to bring some royal celebration into your family, consider some of these British-inspired baby names.

Alfie: We first fell in love with this British name when the movie Alfie was released back in 1966, starring Micheal Caine, and then again in the 1994 remix starring Jude Law. This name has a strong “ladies’ man” feel to it thanks to the movie.

Alastair: If you’re looking for a name that packs a lot of power punch, this one is it. Of British origin, it sounds like the CEO of an important company. It’s also often used in soap operas for the wealthy older gentleman.

Burnaby: While this name isn’t all that common right now, it has a strong sound to it and is likely to gain in popularity now that names of British royalty will surely be on the rise.

Hugh: Two famous actors carry this name (Hugh Jackman and Hugh Grant, anyone?), and both are sexy, smart and successful, which is a pretty good track record for the name. If you’re looking for a British-inspired name that could increase your son’s chance of a happy life, this is it.

Piers: If you’ve not heard of British TV host Piers Morgan, you might not have seen this spelling before. It sounds the same as the typical spelling of Pierce, and it’s a short, older form of the more common name Peter.

Alice: Who doesn’t love this name? Alice has been popular on and off for a long time and has deep roots in British heritage. Meaning “noble” or “kind,” what better qualities are there for your little princess?

Pippa: The sister of the Duchess of Cambridge sprung the name Pippa into popularity. It’s an English name thought to be the shorter form of Philippa, another strong British name.

Gwen: This name has grown in popularity ever since two super-famous celebrities brought it to our ears. It’s of Welsh origin and is the short form of Gwendolyn. If you’re looking to give your baby a name that’s not screaming British, this is the perfect fit.

Matilda: Do you remember the movie Matilda? The 1996 film about a girl genius who makes the best out of life was a favourite of many growing up. Though of German origin, it was one of the names speculated to be given if the Duchess and Duke of Cambridge had a girl.

Hermione: No doubt the popularity of this name skyrocketed thanks to British author J. K. Rowling’s use of Hermione in her mega-popular book series Harry Potter. The name is of Greek origin, but it will forever be a part of British heritage now.