Are you down to those last summer days and struggling to come up with plans for a fun family day out? We might have an option that could result in some tasty treats. 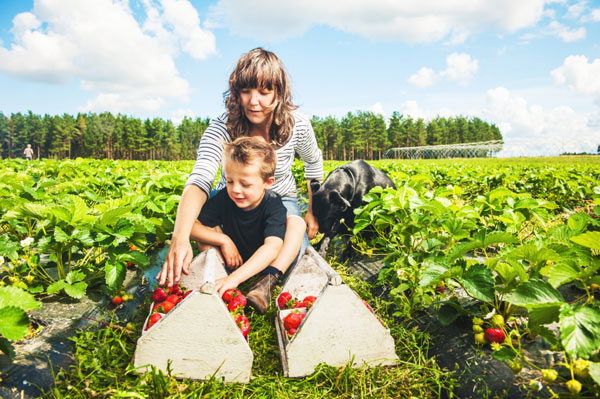 Every summer, orchards and farms are brimming with seasonal fruits and vegetables just waiting for your picking. Yes, we know there is great convenience in stopping by the grocery store, but a day of fruit-picking with the family might just excite them into eating fresh food (and tire them out for a good night’s sleep!).

As we start to head into the last days of summer, farmers are keen to sell produce that’s going out of season, and new goodies are coming in for a menu change. Just remember to pop your kids into sensible shoes and to slap on some sunscreen before hitting the farms.

Want some ideas on what to do with your freshly picked produce?

Most of the best berry action happens around July, but many farms still have lingering strawberries, blueberries and blackberries in August. Most kids can’t resist berries of any kind, so if you want them to snack on something that’s good for them, this could be your best bet.

The Fruition Berry Farm in Kingston, Ontario, teaches you the best way to pick its strawberries and blueberries, selling them by 2-, 4- and 6-litre baskets. The owners are also more than happy to chat with you about how to store your fruit for the short term or long term in the freezer.

About half an hour south of Vancouver, British Columbia, are the Emma Lea Farms, where you can pick blackberries and blueberries until late August.

While you might not be able to pick the corn yourself, you can visit the thriving farms where you can purchase pre-picked produce and participate in fun farm activities. As fall starts to come in, the corn harvest starts to lighten, so if corn is a family favourite, make the most of buying it fresh from the farm.

Down in Sarnia (Lambton), Ontario, you can spend an afternoon at Korny Korners Farm getting lost in the corn maze, patting farm animals and tossing pumpkins. For big corn fans, they say, “We will also be adding a special variety of yellow sweet corn to our list of produce this year.”

A great tip if you pick up a lot of corn is to make batches of corn chowder and freeze them. You’ll be thankful you did when the cooler nights start to hit!

A great item to buy (or pick) in bulk is tomatoes. You will taste some amazingly ripe tomatoes from August through to September — perfect for salads. However, if you get your hands on a good tomato or pasta sauce recipe, you can make jars of the stuff to last you through the winter. You can also roast and purée tomatoes into a soup and freeze it for later.

Whittamore’s Farm in Markham, Ontario, has a large turnover of fruits and vegetables from May to October, but it’s ready to sell tomatoes starting in August.

Apples are just starting to come into season in early fall, so if you’ve ever wanted to try the freshest apples, head on over to your nearest orchard.

Although picking a large batch of apples might not mean you eat them all, don’t worry, because they are one of the tastiest fruits to preserve for the coming winter. Make batches of apple pie, and freeze them.

If you’re keen to start your fall decorating and Halloween rituals early, you might be able to find some local farms selling their first harvest in late August or early September.

Most local farms that sell other fruits and vegetables during the summer months have a sideline of pumpkins ready for your picking. So check your local farm, and see when it’ll be ready for your visit.

Should We Really Be Telling Our Kids There Is a Tooth Fairy?

Solidarity to Bachelorette Ali Fedotowsky-Manno, Whose Son Just Pooped in a Pool