Dogs are known to be great companions. Many dogs also have important jobs, such as helping individuals who are legally blind and assisting police officers. Therapy dogs have also been shown to help children with autism in several ways. 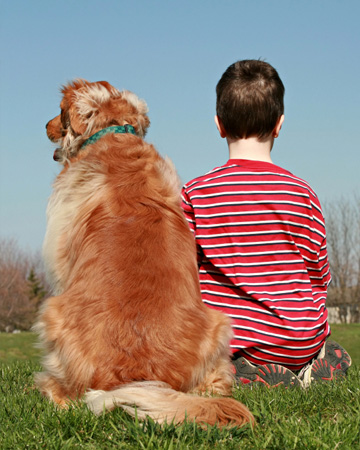 For a parent of a child with autism, safety can be a major concern, especially when in public. A child with autism can quickly become overwhelmed in public and might try to take off. This can add stress and worry to a simple family outing. However, family outings are still important, as social isolation can cause problems. This is where an autism support dog comes in. An autism support dog is trained to keep a child safe. If the child tries to leave, the dog will circle him or her to stop the child and will bark to alert the parents. Another option is to use a waist belt to connect the child and the dog. The parent is able to then take the dog’s leash. This keeps the child safe without physical contact, which can be overwhelming. In addition, the dog’s presence becomes routine, which can help calm the child.

Learn about the best dog breeds for children >>

A 2012 study conducted by the Autism Resource Center at Hospital Bohars in France found that autistic children who had a pet showed an improvement in social skills, while children who didn’t have a pet did not improve. This improvement was especially noted in children who had their first pet at around 5 to 6 years of age. In particular, improvement in sharing was noticed. Improvement was also noted with regards to learning how to comfort and communicate with others. While it is not clear why dogs help autistic children learn empathy, it is thought that children are able to understand dogs better than they do humans. Dogs are not as complicated socially as humans are, so a child with autism might be better able to predict their behaviour. In addition, as the child learns to command the dog, they begin to understand the positive effects of communication, which helps promote social and language skills.

Find out if your dog could be a therapy dog >>

In combination with behavioural therapy and other interventions, learning to work with an autism support dog can have multiple benefits, including the following: