Oh, come on, parents! Loosen up! The world of cinema has been poking fun at parents for decades now. Here’s our humble roundup of the crème de la crème of the genre. 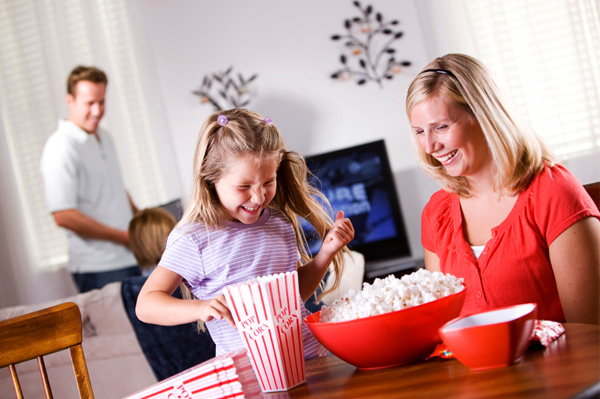 You really can’t lose with this plot combination: a mother and teenage daughter who constantly quarrel, then bam! They magically switch bodies and must learn to appreciate each other. Of course, the switcheroo and adjustment to it bring many a laugh. Whether you opt for the 1976 original starring Barbara Harris and the baby-faced Jodie Foster or the 2003 remake with Jamie Lee Curtis and pre-jail Lindsay Lohan, both are stellar choices.

OK, if Robin Williams doesn’t immediately sell this movie to you, then… get therapy! We kid. But how about Robin Williams as a British housekeeper named Euphegenia Doubtfire? Now we’re talking. The film tells the story of a loving father (Williams) who’s going through a divorce and loses custody of his children. So to spend more time with them, he gets hired in the guise of a nanny by his soon-to-be ex-wife. To sum up, a fake British nanny (played by Robin Williams) cooks, cleans and disciplines children whilst juggling a false identity? Of course it’s hilarious!

See more on preparing for a baby >>

Oh, ’80s films are the best. Starring Michael Keaton and Teri Garr, the film recounts the story of a couple with three children, who are thrown off balance when the father (Keaton) loses his job and the mother (Garr) ventures back into the labour force. Think of an inexperienced husband put in the position of a housewife, and toss rowdy kids into the mix. You’ll be rolling on the floor with laughter. Watch this one with your significant other for a more elevated experience.

Starring Dennis Quaid and Rene Russo, this is a story of a strict, widowed Coast Guard admiral (Quaid) and father of eight, who marries his high school sweetheart, a handbag designer (Russo) who’s also widowed and has 10 children. You got it all right here: a houseful of 18 children, a collision of parenting styles, conflicts, resolutions, tears and many, many laughs. It’s down-to-earth, it’s cute and it’s just plain funny.

This one just makes us all warm and fuzzy inside… The lives of three bachelors (played by Tom Selleck, Steve Guttenberg and Ted Danson) are turned upside down when a baby is dropped off at their doorstep — literally. Inexperience, juggling work and a child, learning how to take care of a little baby girl — all relatable to any parent and hilarious in a comedy. This movie is not only funny but also really showcases paternal instincts at their best.

This film even had two TV spinoffs; that’s how good it is. Starring Steve Martin, it’s a complicated story of Gil Buckman, who learns his young children are struggling with emotional problems and is forced to reassess his role as a father. The film revolves around Gil, his father, his two sisters, his brother and their respective families. It depicts dysfunctional family relationships in a hilarious and humane way, reminding us that no family is perfect. The dynamic among the different households is hysterically funny and will probably remind you of one of your own family reunions. It’s a classic!

Learn how to introduce your child to a new father figure >>

Baby gifts fit for a royal couple
Age-old question: To breastfeed or not to breastfeed
Throw your daughter a perfect girlie birthday slumber party

6 hrs ago
by Ambrosia Brody