With the increased exposure to the media kids have today, it’s no wonder they may have more thoughts on their bodies than in years past. Find out if your kids are simply learning about their bodies, or if they may be dealing with issues of self-perception.

Related story How Hot Is Too Hot for Your Kids to Play Outside?
Issues of self-perception 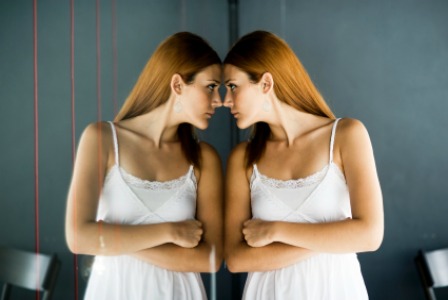 The Social Issues Research Centre reports that young women today see more images of outstandingly beautiful women in one day than their mothers saw throughout their entire adolescence. They also explain that eight out of 10 women are dissatisfied with their reflections in the mirror, and more than half see a distorted image. And unfortunately this negative self-perception starts early. According to WebMD, a study done at the Hospital for Sick Children in Toronto reveals that 30 per cent of girls between the ages of 10 and 14 are dieting. Whether they’re at school, at the mall, at home or virtually anywhere in between, kids are constantly presented with images of “ideal” beauty. If you hear or see your child constantly making comparisons between herself and images of models or actresses, there may be cause for concern. Warning signs include frequent comments about other girls’ weights, damaging statements about herself and excessive focus on and determination of worth based upon appearance. But there’s no point in lashing back at the media. Instead, use the media to start up thoughtful conversations with your children about what it means to be healthy and feel beautiful.

Sometimes adults or other children think they’re simply making an observation, but their words can cut deeply. Is your child constantly being told that her ears stick out or she’s a little larger than some of the other kids at school? No matter how strong she may be, hearing those types of comments can wear on a child. When she mentions that someone has said something hurtful, avoid brushing it off too quickly. Instead, ask her about how she’s feeling, empathize with her emotions and help her build up coping mechanisms to deal with such comments. Often just talking about the situation can help a child feel validated, and finding her voice can assist her in getting help to deal with the situation rather than deal with it in a destructive manner internally.

Attempting to alter her body

Is your child often altering her eating or exercise habits in attempts to change her body? Has she become overly focused on consuming less food and/or on working out? If she is suffering from obesity or poor nutrition, you can work together to improve habits. But if she is acting out of a desire to appear more like her friends or the pictures she sees in the media, it’s time to step in. The key to preventing a dangerous eating disorder from developing is by identifying and preventing it early on. So if your gut tells you there’s cause for concern, take action.

Fearing for the well-being of your children can be overwhelming, but you don’t have to go through it alone. The Canadian Mental Health Organization is dedicated to assisting people of all ages who are dealing with mental health issues such as body image concerns. Provinces have their own toll-free phone numbers, so don’t be afraid to call and find the answers and support you need.

Ways to get your kids “health”-conscious, not “thin”-conscious
Healthy eating habits to pass on to kids
Childhood obesity: How big of a problem is it?

23 hrs ago
by Sabrina Rojas Weiss