If your child regularly comes to you with a nosebleed, it’s important to know how to properly treat it and help prevent them in the future. 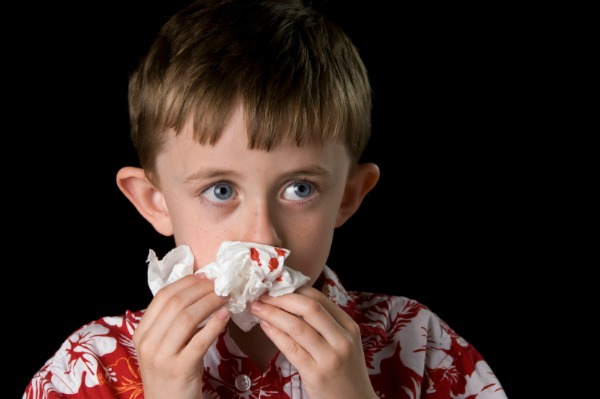 Does your child frequently have nosebleeds? While it may scare them a fair bit to have blood unexpectedly gush from their nose, it probably has you concerned as well. Rest assured that nosebleeds typically are not a major issue. Frequent nosebleeds in kids is actually quite common.

Some causes of nosebleeds

Nosebleeds occur when a small blood vessel in the nasal passage bursts. This can happen for a few reasons:

How to treat a nosebleed

If it appears that dryness is the culprit of your child’s nosebleeds, invest in a humidifier they can keep on at night in their bedroom to help prevent nosebleeds from occurring. Of course, you should also work on getting your child to quit their nose-picking habit.

When your child is having a nosebleed, don’t make them tilt their head back. Have them sit up straight in a chair and lean forward a bit — not too forward or with the head down, though, as this may cause more blood to pour out. You can also have them pinch the fleshy part of their nose, just toward the end of the bridge. Applying pressure here can help stop the bleeding.

When to see a doctor

If your child’s nose won’t stop bleeding after a few minutes, you can consider bringing them to the doctor. However, you should definitely see a doctor right away if your child’s nosebleeds aren’t spontaneous occurrences, but happen frequently. Your child also needs to see a doctor if the nosebleed is the result of an accident (if they’re hit by a ball in the face, for example) and won’t stop bleeding.