Make family time learning time with these fun, educational card games to play with your child. 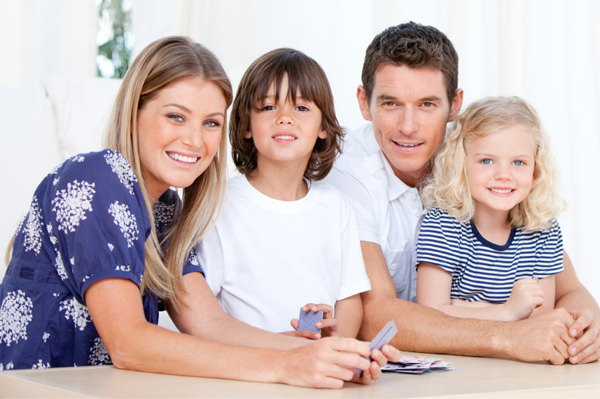 Playing card games is a fun way to spend some time together and can also be a great way to help your child improve his or her math skills! Check out these three games to try.

Two to four players. One standard deck of playing cards.

Shuffle the deck and lay the cards facedown in four rows of thirteen cards. The first player turns over two cards, one at a time, and if the numbers match, they keep the cards, then take another turn. But if they don’t match, the cards are turned back over, and the play moves to the next person.The play moves from player to player in a clockwise rotation until all the cards have been matched. In standard concentration, the goal is to collect the most pairs, but in the kicked-up version, the goal is to have the highest score , which is the sum of all the numbers from their collected cards. When a player correctly matches a pair, he or she places the cards faceup on the table, allowing the other players to keep track of that player’s score as well as plan a strategy. Kick this up another notch by matching colours and numbers. For example, a jack of clubs would match a jack of spades, but wouldn’t match a jack of diamonds. Take each card at face value, with an ace being one and the face cards each having a value of ten. When all cards are matched, the player with the highest total wins.

Two players sit facing each other. Shuffle the cards and split them into two even stacks, then place one stack in front of each player. Keep them facedown. At the sound of “go,” both players simultaneously turn over the top card and quickly place it faceup in the middle, between the two piles of cards. Each player multiplies the two numbers shown on the cards and yells out the answer. The first one to shout the correct answer wins the two cards. Repeat until all the cards in the dealt pile are gone. Whoever has won the most cards at the end wins the game. A variation for children who aren’t quite ready to tackle multiplication is to add the two numbers together instead. Take each card at face value, with an ace being one and the face cards each having a value of 10.

Two to four players. One standard deck of playing cards.

Shuffle the cards, deal five cards to each player, then have the players pick up their hands. The remaining portion of the deck is placed face-down in the center of the table with the top card turned up. The goal is to reach a hand that totals 25, so each player takes a turn drawing a card from the deck then discarding one faceup in a pile beside the deck until someone reaches 25. If the cards in the deck have all been discarded before someone wins, simply take the discard pile, shuffle and reuse as the deck. Take each card at face value, with an ace being one and the face cards each having a value of 10.

Seven Moms On How “Minimalist Parenting” Changed Their Lives