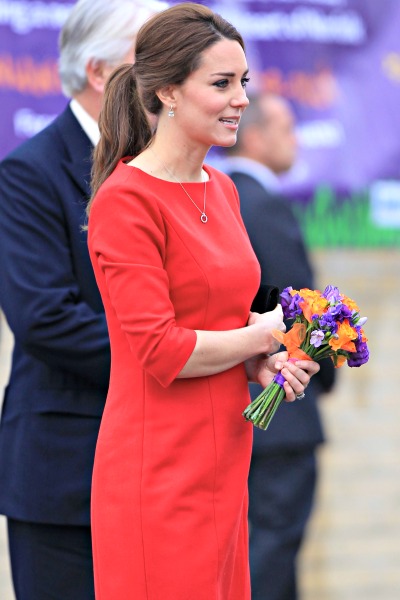 Pregnant Kate Middleton wore her hair in a ponytail as she attended the East Anglia’s Children’s Hospices Norfolk Capital Appeal launch at the Norfolk Showground in Norwich. The Duchess of Cambridge looked radiant in red as she held a bouquet of flowers in front of her small baby bump as she spoke to the crowd.

“I greatly admire the dedication, generosity and achievements of the charity’s supporters and volunteers, and look forward to seeing the progress of this campaign,” Middleton said in a speech, as she works toward raising money to build a new hospice for children.

Due in April, the Duchess and Prince William are traveling to New York City next weekend — and journalists covering the royal couple have been given orders by Buckingham Palace to dress nicely for the occasion. “Those wearing jeans or trainers will not be admitted and casually dressed members of the media will be turned away. This also applies to technicians,” the guidelines said.

6 hrs ago
by Anna Davies