A note that was enclosed in a 1970s-era LEGO package explained that both boys and girls could play with LEGO toys because boys like dollhouses and girls like spaceships — a concept that still rings true today. However, the toy giant doesn’t seem to still have the same mindset. Why not?

In the ’70s, LEGO had the right idea. Someone found a really amazing note in an old package of LEGO toys, so of course a photo was uploaded to Reddit. 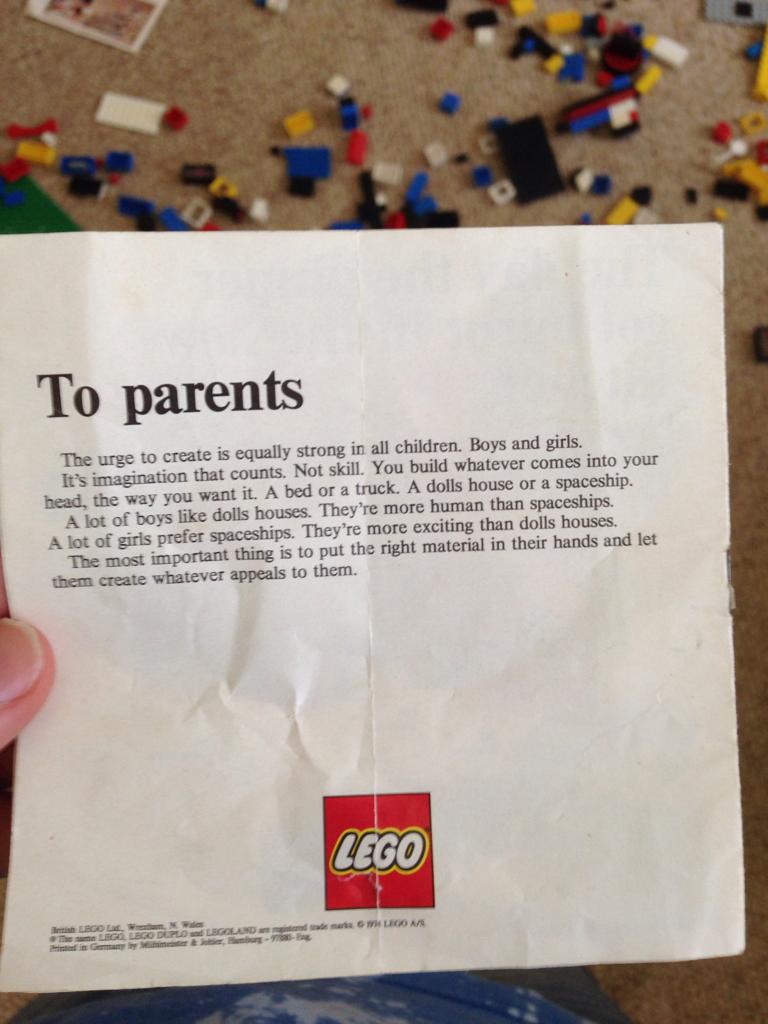 The urge to create is equally strong in all children. Boys and girls. It’s imagination that counts. Not skill. You build whatever comes into your head, the way you want it. A bed or a truck. A dolls house (sic) or a spaceship.

The most important thing is to put the right material in their hands and let them create whatever appeals to them.

LEGO’s advertisements during my childhood were definitely more gender neutral than they are today, and the creators of the iconic block empire, back then at least, realized that there really aren’t any “boy” toys or “girl” toys. Of course, with the introduction of the much-reviled LEGO Friends line in 2012, the company has continued to come under fire for specifically catering to girls using sets that are completely feminine, while the female presence in other “regular” sets is hyper-feminized. But back in the ’70s, they at least understood that boys would like to play with “girly” things, and girls would like to play with “boyish” things. Or rather, kids would like to play with toys. Right?

https://twitter.com/CatyCatherine/status/446301869015437312
While I admit that the note looked a little fishy to me (in other words, it looks kind of homemade and the grammar is questionable), fortunately a Redditor did some amazing sleuthing and turned up info that shows this is an English translation of a German-language pamphlet — a note that ironically came with the first LEGO sets aimed specifically at girls.

Shopping for toys in today’s stores is often an exercise in frustration, as parents are confronted by aisles of nothing but pink, and aisles of “everything else.” And this dichotomy is often compounded by boys (or their parents) who forbid them to play with anything girly, even though boys are just as capable of playing house and nurturing dolls as their female peers are.

No matter what, I love this note and what it represents, and I wish that similar notes were included in modern-day LEGO sets. Sure, we’ve come a long way, but in some ways, it seems like we’re going in the opposite direction.

14 hrs ago
by Emilia Mense Caby