A high school teacher in a rural Arkansas town fed her baby in class, prompting a student to take a photo of her nursing her infant. This is wrong, but maybe not in the way you think it is.

A student at Poyen High School took a photo of one of her teachers, who reportedly brings her newborn baby to class on occasion — and breastfeeds it. The student, who wishes to remain anonymous, says the baby is disruptive because she can hear it crying during class, and she feels the breastfeeding is distracting as well, “… especially since we have a bunch of teenage boys in there.”

The students that FOX16 interviewed, with the exception of the main complainant, didn’t seem to think this was a big deal. One teenage boy said the baby was cute, and another, also a teenage boy, said that when the baby cries, his teacher simply takes care of it. End of story. 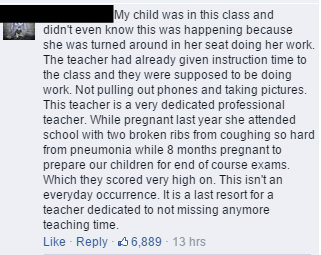 First off, the superintendent of this school district is amazing. When contacted by FOX16, he shared that he allows teachers to bring their children to class when needed. He recognizes that working moms need more flexibility, and this creates a better relationship between a dedicated teacher and her employers, which in turn allows her to be a better teacher.

Second, I think this teacher is giving her students a wonderful example. She’s showing that you can be both a mother as well as a professional, and she’s also giving them an opportunity to see breastfeeding in action. Breastfeeding is only taboo because we, as a society, have made it so. The more young people who see a mom nursing her baby, the less of a problem breastfeeding will be when they are old enough to have babies of their own.

And finally, I’m super bummed out that the female student was the one complaining about the breastfed baby being a distraction for the male students. Why would a female student raise a fuss about what is or isn’t a distraction for boys? Girls and women are often told that the clothes they wear or the behavior they exhibit is improper because it gives boys and men the wrong impression. Why add fuel to that fire?

This teacher seems like an excellent, dedicated educator. Hopefully the kids in her class will use their work time more wisely in the future and will actually buckle down and study — rather than taking out their cellphones during class and snapping photos of a mom nursing her baby.