Kids know exactly what Santa is supposed to look like, so why do adults continue to try to get away with scary imitations of the red suit?

When he penned ‘Twas the Night Before Christmas in 1823, Clement Clarke Moore described a friendly, lovable Santa Claus. Sadly, generations of impersonators to follow interpreted Moore’s literary description a bit differently than he had perhaps intended.

1. “He was dress’d all in fur, from his head to his foot.“ Here, we envision a sumptuous red suit trimmed in fluffy white fur and held together by an ornate black belt. Except for this guy — who looks like he just wandered out of a liquor store. 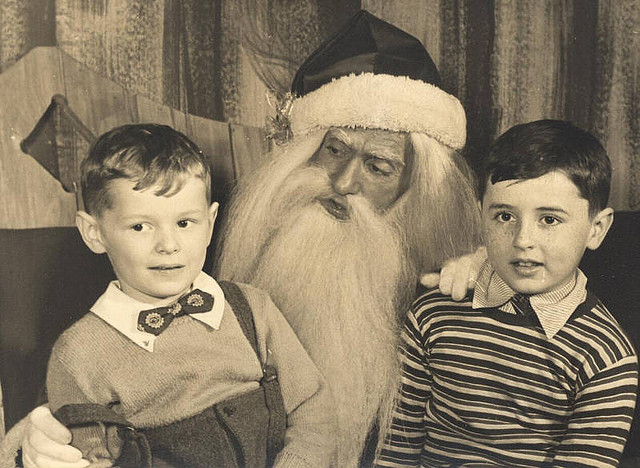 2. “And his clothes were all tarnish’d with ashes and soot.” We fully understand, of course, that the ashes and soot were the unavoidable result of squeezing down the chimney. That’s very different than just forgetting to pick up laundry detergent.

3. “A bundle of toys was flung on his back, and he look’d like a peddler just opening his pack.” Peddler, people… not pedophile.

4. “His eyes — how they twinkled! His dimples: how merry.” We’re looking for eyes that twinkle, not glow.

5. “His cheeks were like roses, his nose like a cherry.“ We’re thinking that the real Santa Claus was flushed from the excitement and the cold. Not because he’s a raging alcoholic or a freak show clown.

6. “His droll little mouth was drawn up like a bow.” He got the suit right, but he’s got to work on that Santa expression.

8. “The stump of a pipe he held tight in his teeth, and the smoke it encircled his head like a wreath.” Santa’s pipe was probably a gorgeous antique — not an ill-placed Marlboro.

9. “He had a broad face, and a little round belly, that shook when he laugh’d, like a bowl full of jelly.” “Robust” is one way to describe Moore’s Santa. But for this guy, we’re thinking “death warmed over.”