What kid doesn’t at least have a passing fancy of becoming an astronaut and exploring space? But for most of us when we become adults, responsibilities and reality set in, and our star-filled dreams are pushed to the side. Yet one Chicago-area mother was able to live out her out-of-this-world fantasy by “piloting” a mission, Space Camp style.

Last month, 39-year-old Veronica Arreola got to live out a dream many of us left behind in our childhood. Leaving her 11-year-old daughter and husband back home, Veronica headed down to Huntsville, Alabama, to spend a few days getting as close to the space experience as one can get, short of becoming a NASA astronaut. Hearing Veronica gush about her amazing experience makes me want to dust off a few of my own childhood dreams.

SheKnows: How did the idea of going to Space Camp as an adult come about?

Veronica Arreola: I’ve wanted to go to Space Camp since I found out about it when I was maybe 12 or 13. After the Challenger explosion, I became obsessed about NASA and the space program. I wanted to be an astronaut. In high school I flipped to marine biology and exploring the oceans. My master’s degree is in public administration and, ironically, the Challenger disaster is one of my favorite case studies in that field. It combines gender with line of command. So the space program has never really left my life. I’m turning 40 in December and going was my birthday present to myself, with a lot of help from friends and family who chipped in to pay for the trip.

VA: It was awesome! I went by myself and found that most people go solo. One woman was there for her birthday and said she wanted to attend by herself so she could focus on the experience. I think that was super smart. There were others who were there to celebrate a birthday, retirements and one because of a divorce. I know all of that because the crew I was assigned to was full of amazing people. Which was good because we were together for 12 hours a day! Most of the experience was spent on shuttle missions. We went through four missions. These were simulations of the training that astronauts go through. It was pretty intense, but also a lot of fun. On day two I was pilot on the shuttle and I had to flip a zillion switches in a few seconds. If you look at the panel, you can see how difficult it can be to flip one switch in five seconds, much less about three every few seconds. 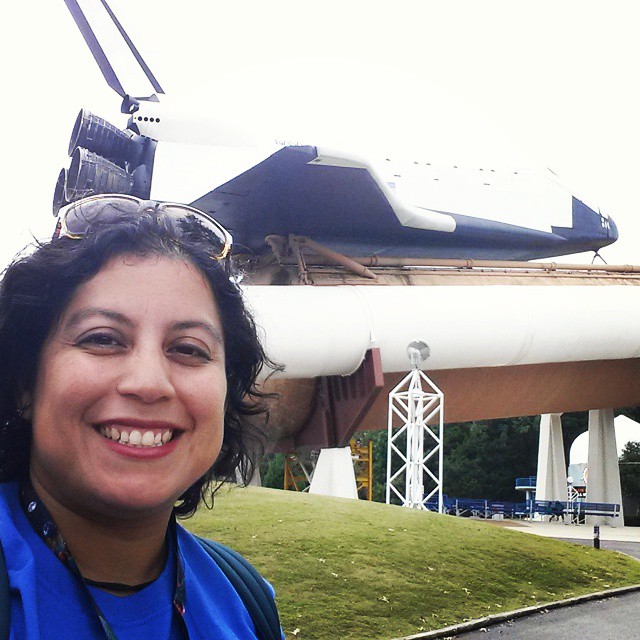 SK: How did it feel to pilot a mission?

VA: When I heard my assignment, I squealed. And even though former astronaut Robert Gibson told us on the first night that the commander is the real pilot and the pilot is the co-pilot, I didn’t care one bit. I was sitting shotgun on the shuttle! It was stressful, though, to have to work with so many control panels.

SK: Are there any lessons or experiences from Space Camp that you’ll be bringing into your day-to-day life?

VA: I did come back to the office with a renewed spirit. Nothing like spending four days in a museum (Space Camp is located within the U.S. Space and Rocket Center) filled with men doing awesome things to remind you that your professional mission is to get as many women doing those same awesome things. It also reinforced the fact that we will fail many times before we accomplish anything. That is what scientists, explorers and humans need to do. After the recent Virgin Galactic crash where a pilot died, some in the media questioned if this was the end of space exploration. We cannot think that way. We need to figure out what went wrong, fix it and keep on moving toward the day space travel is as safe as airplanes.

SK: Was the trip worth it in the end?

VA: It was! If I go again, I would do it with my daughter. It was just too much fun!

You can read more about Veronica’s experience at Space Camp at her blog, Viva La Feminista.

31 mins ago
by Tamara Kraus